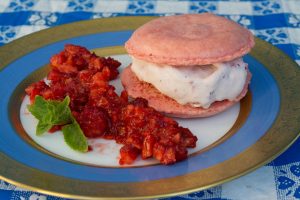 In several trendy restaurants I have had the pleasure to eat at lately, French macaron seemed to have stepped up to the next level.  Instead of the usual one inch diameter delectable confection filled with butter cream or ganache in some delightful pastel hue, someone had the brilliant idea to supersize the macaron to about two and one half inches in diameter and fill them with frozen yogurt, sorbet, or ice scream.  This recipe is easy to make parve, or kosher for Passover.  It is lower calorie than cake, gluten free and refreshing.

Having taken the macaron class and the advanced macaron class at the Gourmandise cooking school I felt ready to tackle the task.  The first batch of macaron had a gooey texture because I put too much pulverized freeze dried strawberry in the mix before baking to give them a pink shade.  In the trash they went.  The second batch, I accidentally put the little sealed packet of crystal something that often comes in powders and such to keep them dry in the food processor, along with the ground almond flour.  My son, the scientist, said that the stuff in the packet is poison so after baking , filling and taking the gorgeous photographs I had to toss the whole lot in the trash as well.

Don’t lament, next week for a an evening barbecue I am charged with bringing dessert and I will make parve macaron sorbet sandwiches to bring for dessert.

To make macaron you will need a scale with a tare function that you can set to grams, a large stainless bowl and a large spatula.  They are not expensive and have many uses.  A tare function on a scale makes it possible to weigh the  ingredient without the weight of the bowl included.  Once you get used to measuring in grams on a scale it is accurate and easy.

This is the Gourmandise Schools Macaron Basic Recipe

1.  Heat oven to 350° F.  Place powdered sugar, almond flour and salt in work bowl of food  processor.  Process for a minute to combine everything.

4. Fit a piping bag with a large round tip.  Place one half of batter into bag and pipe macaron onto parchment lined, rimmed baking sheet about two inches in diameter. Repeat.  I used two baking sheets for this recipe.  Let macaron rest uncovered at room temperature for one half hour. When macaron are completely cool you can fill and serve or store them for a few hours in a box.  soften sorbet in refrigerator for a little while.  With gloved hands scoop out 1/ 3 to 1/ 2 cup sorbet and flatten into a disc about same diameter as macaron.  Make a sandwich.  Place on dessert plate.  Add a few raspberries and some minced strawberries (I pulsed them in a food processor for a couple seconds).  Serve.  As you can see in the pictures I filled some with chocolate sorbet and decorated a plate with salted caramel ganache and some salted Virginia peanuts.  In another version I put strawberry ice cream.  So good!