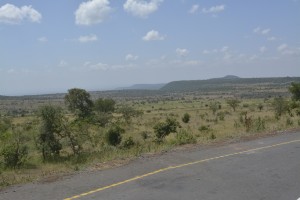 The Serena Duluti Lake hotel is indeed serene. A fitful jet lag sleep of exhaustion was followed by another good shower. We went up to the main lodge building for breakfast. The dining room had a fantastic view of Lake Duluti and the surrounding jungle. Breakfast –two eggs over easy with toast, marmalade, peanut butter, fresh fruit, fresh squeezed pineapple juice and delicate small bananas. Just great.
I went back to the room brushed my teeth again and as usual I ran back up to the entrance of the hotel where I had spied a girl dressed in traditional garb siting on the ground displaying her skill of making beaded bracelets. I bought three, quickly before anyone could see me. My philosophy on trips is buy it when you see it because it doesn’t come round again. On to the Land Cruiser and off for the day we headed to the national park but first a short stop to see the Jewish grave stones in an old Polish cemetery maintained by the Polish embassy. In the back corner were some grave stones with Jewish stars engraved in the headstones. These immigrants to Tanzania came after during WWII in 1944. We drove on dirt roads through local farmland after finding a local who knew where it was. He hopped in the cruiser and guided us. Bananas grow everywhere. Lush green hillsides with flowering plants and vibrant colored flowers makeup the landscape. Children in school uniforms were walking to their schools. The drive to the Lake Maynara National Park and Game Reserve was about two hours. Along the way shops, garages, restaurants, bodegas full of small goods and local farm markets lined the highway, as we went from rural to city to rural Arusha. We also passed many brick making factories. People dressed in all manner of clothing styles, western, tribal, traditional Masai. The most popular mode of transportation seemed to be motorcycles and local buses the size of large vans brightly painted with all kinds of advertisements. In one place the local market was on Tuesdays and Saturdays where people bring their goods for sale. The locals were cleaning up the after the previous day’s market as we passed by.
Women with good posture were carrying huge baskets of goods on top of their heads. Some people sat buy the road in the shade with gigantic hands of bananas for sale. In Tanzania people eat quite a few bananas, not just sweet ones but some other varieties as well. They are used in stews with chicken and meat and any number of ways. Eventually we passed the populated area and drove over rolling hills of beautiful grassland. Along the road were many colorfully dressed Masai people, with their bangled ankles and tire tread sandals. We entered the national park and had to stop at the entrance for permits. I took advantage of the facilities while I waited for Beni to obtain them. As we entered the park right away we encountered a family of Baboons crossing the road. Mothers with babies on their backs and fancy looking males. Baboons are aggressive and you have to roll up your cruiser windows when passing them. The road began to curve and descend into a heavily shaded area. Shhh, there is a large elephant in the distance. OMG my first big wild animal spotting. We found a beautiful overlook for a picnic lunch since everyone was quite hungry by now. Emerging from the jungle shady area we were much closer to the lake. In the wet season the shallow lake comes up much closer and the high water mark wasn’t too far away when we spotted a herd of Zebra. The Zebra are truly a vision with each one being striped so boldly, a little bit differently than his brothers. This was the picture taking opportunity of a lifetime. Across on the other side of the lake I could see a band of intense pink along the shore. The famous flamingos so numerous as to be visible from miles away. We continued near the shore of the lake crossing dry stream beds and seeing various Gazelle and Antelope. The Thompson Gazelle is so lithe and beautifully marked with the males sprouting magnificent striped horns, I wish I had a coat or sweater in those colors. Up ahead Beni call our attention to a giraffe head poking out above a large tree that he was grazing on. Soon we spotted more giraffe and they were close enough for pictures. We wound are way back towards the green area driving past many more groups of Gazelle, Zebra and giraffe, not bad for the first day outing. Back in the thick green jungle type area the bridge over a rushing stream was out and we had to drive directly through the water. Then, a huge tree was downed blocking our path and as we skirted around we spotted an elephant in the woods. We drove a bit further in an attempt to get a better look and a group of elephants had just crossed the road. The slower baby crossed directly in front of the cruiser. Wow!! On our way back out of the park now we passed blue monkeys, baboons and Vervet monkeys whose balls are blue. We exited the park thrilled beyond words and proceeded to drive on towards the Explorean lodge near the entrance of Ngorongoro National Park tomorrow’s destination. The Explorean lodge is magnificent. Consisting of a main house with 20 thatched roof cottages, pool, massage and, Wi-Fi, set in lush mountains teaming with life. Mr. Stanley is the manager and he was most gracious. Our cottage had every convenience and we slept in a huge mosquito netted bed once again. We sat out on the veranda and chatted before cleaning up for dinner.