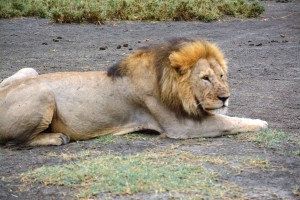 On the escorted walk to breakfast, my Masai protector pointed out zebra prints and water buffalo prints in the gravel.  There was poo from large animals even at the bottom of our stairs to our tent.  This is a happening place after dark.

The chef was making omelets to order today along with Tanzania pancakes which are like crepes.  I can eat eggs and toast every day of the week. Coffee and fruit and we were all set.  Interestingly the eggs here have very pale yolks, they blend with the whites.

The Masai warriors escorted us to our Land Cruiser and we drove toward the wide open planes.  First though, we went down toward a sandy area because Beni heard about a male lion taking a nap out in the open.  On the way in the bush we passed an injured zebra just waiting to be someone’s dinner later.   Sure enough a large male lion was just napping fearlessly out in the open.  We drove up to about 10 maybe 7 feet away.  He lifted his sleepy head to look at us and decided we were no threat and went back to his nap. Driving back into the bush we passed trees that looked like they were full of hanging baskets, these are various bird’s nests.  So many varieties of birds in these parts, including Bishop Birds, Storks, vultures, eagles, and small birds in iridescent turquoise blue shades with a rust colored belly.  We saw DikDik or what they call a Super Christian, a variety of tiny gazelle that mates for life and is always with its partner unlike some others in the animal world. Out once again on the open plain hundreds of Thompson Gazelles or ‘Tomies’ as they are called were leaping and running, some were just taking a rest. They are so lithe and graceful.  Then Beni spotted a hyena den not too far off the road on the left.  We drove directly up to it and I caught site of the cubs.  The adult hyenas backed off but continued to circle us and gaze with suspicion as we tried to photograph the den, from our vehicle of course. Beni made a left, and we bumped our way down another road breathing dust and opening and closing our windows with the arrival of passing cars and their dust clouds.  He stopped short because right on the side of the road was a group of vultures picking the remains of a wildebeest carcass clean.  The vultures were not the last group that would leave nothing but bones from this wildebeest.  There were vultures on the lower rung waiting their turn.  All over the plain you can see these killing circles, I call them, a cleared area with only the bleached bones of a wildebeest or some other animal victim, horns still intact.  You can tell what the victim was based on the skull and horns left. The limitless expanse spread before us looking quiet and calm until we got closer.  Huge herds of wildebeest were grazing, running, and frolicking in the short grass. February is the migration time in this area and also calves are born in February.  We watched the wildebeest for quite a while just having a carefree day unaware of the lurking dangers for new calves.  The migration is in different parts of Tanzania all during the year, based on the rainy season, and what grasses sprout.  Different grasses are good for calves etc… We drove back to the hotel for lunch.  Howard ordered pilipili na parachichi along with our rice and beans.  Pilipili are chilies and parachichi are avocados in Swahili.  After lunch we all went to put our feet up and rest until the afternoon excursion around 4 PM. The afternoon excursion started off by tracking our male lion to a new location where he had moved.  Again he was napping without a care in the world.  We watched and photographed him for quite a while.  Next we drove toward Lake Ndutu.  With the lake in view in the distance we came across a large group of giraffe grazing in the acacia trees, so graceful, giraffe are a little vehicle shy, but I still got some great photos. It was time to head back to shower and dress for dinner.  The temperature drops here at night precipitously since we are at such high elevation, above the malaria mosquito elevation.

Late at night once again the large animals were carrying on, lion growling, hippos making their strange noises as they leave the lake around 10 PM to graze until the early AM.  To think that we are in the middle of this is incredible array of G-d’s creations, how lucky, it gives you a new perspective.  The artistry of design on giraffe and zebra skins is inspiring.

We talked about our incredible day at dinner and Beni told us he is from the Chaga tribe in the Kilimanjaro region.