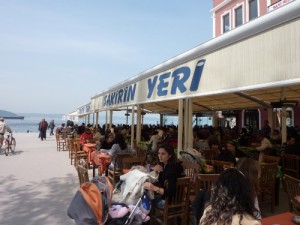 Wednesday night we spent the night at the spa hotel, Hotel Kolin.  We awoke early, anxious to meet Irfan our guide and Osman our driver in the lobby again at 8:00 AM.  But first breakfast, every manner of salad, eggs, cheeses, jams like cherry, apricot, yogurts, fresh baked loaves, pastry, frittata, baharatasi home fries, olives…. so much food.

We got into the car and headed off from Chanakali to the ancient city of Troy or Tuva.  We are talking Homer, the Iliad, the Trojan horse in the 8th century BC it all happened here. Troy was on the coast at one time but over the centuries the surrounding rivers have silted in a huge delta to the point of Troy being inland!  The drive to Troy was beautiful through green wheat fields.  Much of troy has been excavated and you can see that where the city was in Homer’s day and where the Romans eventually built on top of it.

After walking through Troy and marveling at the site of so much history we drove back to Chanakali.  Nona Chiprut, my mother’s mom,  was born in Chanakali and as we stepped out of the car my heart quickened. We began to walk through the charming streets, I felt an instant affinityfor the quaint sea side old town.  Walking down the narrow streets pavedwith bricks laid in patterns we headed toward the old restored synagogue.  We passed so many inviting shops, I could hardly tear myself away but the guide urged us on to our destination. The guide rang the bell at the gate to the courtyard of an old stone building.  A pretty Turkish  girl, the curator, invited us in and we met the president of the Shul, by chance.  Samuel Hatem, was sitting in a well groomed garden having his kahve (coffee).  We sat and spoke in Ladino for a few moments..  We bid Sami adieu and I stepped over the threshold  into a small Midrash in the entrance of the Shul. The 120 year old building has been newly restored from donations received from expats and descendants of this community which has dwindled to only a very few.  Even Sami Hatem lives in Istanbul.

The vaulted ceiling had blue stripes . We passed through glass paned doors into the main sanctuary which contained an ornately carved arc with doors covered in a wine red embroidered velvet  panels.  the embroidery read Ze Hashar Le Hashem, Ha tzadiquim vo u vo.  The rightcheous come and go and these are the gates to god, or something like that.  The name of this Shul is Makor Hayim or The Source of Light. We stopped on the way walking back through Chanakali at a small shop selling hand made lacle table cloths and such.  The place remided me so much of Nona and images of my childhood were in my head.  We bought some old dowery pieces and the store keeper blesses us a thousand times.  We walked further into the town center to a famous fish restaurant frequented by locals. We had lunch with Irfan.   Aftaer picking out a beautiful fish from the display it was prepared to order.  We ate the fish, mezze, and local greens in olive oil and lemon.   The locals eat various local greens like nettles. Everything was so fresh and fantastic especially the haddock and eggplant.  We returned to the hotel Kolin and switched drivers and guides.  Its off to Izmir.

Barreling down the hills in a minivan we headed south through an area most famous for olives . Past Edermit where the hills are covered in olive trees and and the hairpin turns are lined with local vendors selling jars of preserved olives, trushi, honey and homemade jam.  We stop at a roadside restaurant to use the facilities and taste some paynir helvasi, a kind of dulce de leche local favorite.

We emerged from the hills to a seaside road on the glass surfaced Aegean.  It was another hour or so to Izmir.  Finally the beautiful u shaped necklace of a city Izmir.  We pulled into the Swiss Hotel.  The Swiss hotel is a beautiful modern, marble edifice with sharply dressed bellmen and staff , a very refined lobby and a fabulous room.  Definitely 5 star.  We left our bags and waled to the boardwalk for a bit to stretch our legs . The Hotel is only 2 blocks from waters edge.  Talk to you tomorrow Friday.  Love Linda