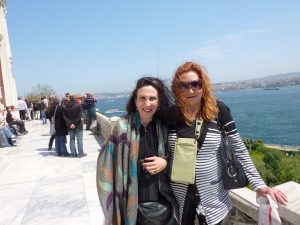 The day dawned hot and bright.  We had breakfast at 7:30, oh my gosh it is so early and I am so tired. The breakfast at the Swiss Hotel was the most elaborate yet. A modern teaching kitchen, omelets any way you like em. Isles of jam, yogurt, rolls, boyuz, borekas, salad and olives,  coffee juice and water, in a modernist sunlit dining room over looking the central courtyard.  We hurried down to meet our new guide Denis and the new driver Shukru.  First stop Sardis.

Sardis is an ancient site discovered and partially restored by archaeological digs happening every summer from various universities.  Sardis existed in the 7th century BC.   it was the most prosperous city of the time and coinage was invented here. We walked through an ancient gymnasium and a very large synagogue with an alter table and mosaic floors.  Other parts of the city have been unearthed as well as baths, a swimming pool in three sections,  a frigidarium (cold pool) a tepidium (room temp pool) and a calderium, (hot pool).  How is your Latin?  The ancients seem to have had a much better concept of hygiene then northern Europe did at the time.  We drove up the road a bit to an ancient temple to Artemus.  There is clear evidence that the huge marble columns were held together with some kind of rebar since Turkey is earthquake country. The ancients were clearly a lot more advanced then we think.  The Freegans and Lydians including such famous names from History as King Midas.

Next we drove through a beautiful valley of rich farmland studded with tumuli of nobles and rich people.  Pyramid shaped, they are mounded with dirt.   We followed this country road across to Pergamon as a shortcut.  Everywhere you see signs for kufte or kuftesi.  Usually a mix of ground lamb or in this area lamb and beef, dried oregano, bread, onions, cumin, sumac, and red pepper.  Baharat  means spice in Turkish and coincidentally in Hindi, so when you buy Baharat it is a blend for a specific purpose, like Kufte Baharat.

The air has a little haze in it and we are wondering if it is from the Icelandic volcano, but Shukru says no it is from bricks that are made from the olive wastes and burned by the farmers as fuel. Pergamon is a city , palace, and acropolis perched strategically on top of a very high hill .  From here the rulers commanded the entire valley.  It was originally founded in the 5th century BC.  It is amazing what has been discovered here.  Marble columns, palaces, a huge hillside theatre.  Famous names in the history around here include Thales the mathematician who new the world was round long before Christ and predicted an eclipse that interrupted and ended a battle between ancient Persians and Lydians. Thalius also saw two iron or stones repelling each other in the province of Magnesia and noted magnetic fields in those times.

Enough history, its 90 degrees and 90 percent humidity I am exhausted.  But one more stop before we head to Izmir.  Denis walked us through an ancient hospital or Asklepion with therapeutic rooms, calming waters where new age medicine was practiced.  Oh the guy who invented stitches Galen, for surgical procedures was around here too. I think the founder of the hospital was Hygienia-oh hygiene-.

We drove back into bustling Izmir a city of 2.5 million on the beautiful Aegean.  Izmir is 6000 thousand years old, founded by Amazons from Anatolia.   Yes Amazons were a real tribe of women warriors.  We bid goodbye to Denis until Sunday and ran into the hotel to freshen up.  A few moments later we walked two blocks over to my cousin Hayim’s rug store.  Hayim greeted us warmly and we sat down to tea.  We returned to our hotel after a bit to get ready for Shabbat. Shabbat dinner was so wonderful at Hayim’s house.  Walking distance to our hotel is an upscale neighborhood of condos and Hayim’s wife Rica was so gracious to invite us to Shabbat dinner.

After visiting and waiting for the rest of the guests to arrive we dined on salads, yapraks or dolma filled with rice, borekas, frittada, bamyas, rice, chicken….. and poached quince for dessert. Rica’s bamyas were so small and tender and delicious.  She said she was shocked when she saw the huge bamya (okra) in the US.    We also tasted some dulce de bergamot.  Bergamot as you know is the distinct flavoring agent in Earl Grey tea and it is a large fruit which they candy in sugar syrup. I am tired.  Goodnight until tomorrow.