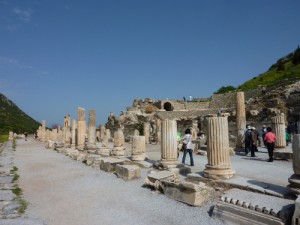 At 8:30 AM sharp our guide and Driver were waiting outside the Hotel for us.  We stepped into the early morning chill and took our seats in the van.  Earlier we received our wake up call at 6:30 in order to have time to pack, be ready, and partake of the fabulous Swiss Hotel breakfast.

One hour after leaving Izmir, our driver Shukru dropped Denis, our guide and us off at the entrance to the Ephesus excavation.  Ephesus is an ancient city with the earliest ruins dating from the 7th century BC and later layers from Roman times.  Walking ahead, to my amazement, after passing some Roman clay pipes remains, we came upon the outer gate of the city.  , Ionian columns and a road paved in marble led to a theatre where people sat for performances and the government had its meetings.  We started down the main road of the ruins.  This was a port city although currently about 6 miles inland.  The city again like Troy, surrounded by rivers, which silted a fertile delta since ancient times, and now the city is inland. Alexander the Great was here, along with histories minions.  Ephesus boasted a library rivaled only by Alexandria and Troy.  Excavated library remains, along with several very luxurious patrician houses that were as large as 6000 square feet line the boulevard.  The houses have elaborate plumbing and very large bathrooms, mosaic floors. Continuing down the marble road toward the library and center of town, we turned right, and started down a street of fancy shops.  So far, they estimate that 10% has been excavated.  The marble road, well worn still has evidence of grooved patterns for traction when it was slippery.  Apparently, chariots were banned on this patrician street.  Near the library, there is a stone with a menorah engraved on it.

We made another right turn onto a very wide boulevard and passed by an amphitheater with seating for 25,000.  They had gladiator games here.  Walking through a low ceilinged passage with spikes of stone protruding from the ceiling, visions of gladiators and animals brought from Africa being led into the arena were in my head.

Next stop, the archeological museum where the best preserved pieces are saved for eternity.  Statues of Artemus with many breasts in white marble somehow survived.

Ah, lunch.  French fries and omelets tasted good.  A plate of sweet sliced oranges and it was time to get going.  Next stop a tile factory.  This area is famous for Chini a type of porcelain fired two times all hand painted in a vibrant palate of primary colors also turquoise and orange.  No two plates are the same.  As we continued to drive the only thing holding me back from going into every shop and snooping around were time constraints and weight restrictions on our upcoming flight!  The cobble stone streets and friendly shop owners are so inviting, oh look at that hand beaded camel back pack, oh an Iznik pattern soup terrine…

At the tile factory we observed the process.  The potters expert hands grabbed a formless blob of white clay, centered it on the wheel and in moments formed a around vessel  with 1/8 inch thick walls, then he made a lid for it that fit exactly without so much as measuring!  Finally, the shop keeper let us into the locked vault room with extraordinary fine pieces of porcelain signed by the artists on the backs.  Plates, bowls, three dimensional glazes, and the colors, ranging up to $25,000, incredible. We looked and sighed, but moved on the regular showroom.  We finished our tour with Denis at this point, thanked him.  He left to go home in his own car since he lives nearby in Kushadasi.  Shukru was ready to take us on the 3 hour trek through winding mountain roads, down south to the coast and to the tourist town of Mar Maris.

Mar Maris is the gateway to the Turquoise coast, a little seedy and this is where tomorrow we will take the ferry to Rhodes and cross into Greece for a couple of days.  Shukru dropped us at the Anemone hotel and we bid him farewell.  He was our driver for 4 days.

The Anemone Hotel was clean, good water pressure, but minimalist like a fancy motel 6 in contrast to the Swiss Hotel, but still with a fabulous breakfast.  After leaving our luggage in the room, we left to walk the boardwalk and find some dinner.  On the boardwalk, you could almost imagine yourself in Israel.  As dusk approached walking the boardwalk along the glass surfaced bay, there were many restaurants still in preseason mode.  The only other tourists around were stranded English people whose flight’s were cancelled due to the Icelandic volcano.  We were a little concerned about our flights next week.

We chose a nice looking boardwalk side restaurant with outdoor seating to have some dinner.  We informed our friendly waiter that we were vegetarians, but would eat a fish. He brought us mezze, bread, and whole grilled sea bass with veggies and French fries.  As dusk turned to night, we ate our dinner and I imagined Poseidon rising from the deep in the lagoon while Hercules came down the craggy mountains just behind the thin coast to rescue some ship.

Well off to bed!