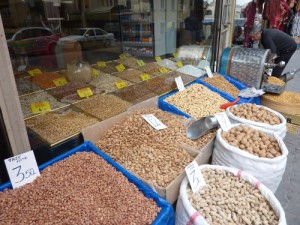 Our cousin Haim  cousin, another Haim picked us up at the Swiss Hotel Lobby.  A nervous man, a doctor, with a low thyroid, Haim walked with us to the old part of the city to a synagogue that was open this Shabbat on the rotation.  As we headed further into the city things were older, earthier, the patina of the fashionable in crowd that frequents the restaurants and clubs on the boardwalk was gone. ……

Crossing the bustling streets, heading further into the densely populated older part of Izmir was a thrill.  Walking pats bakeries, boreka stores, fish vendors, there were a few women wearing colorful head scarves and long coats.  It was getting very warm and humid.  Stopping to use the facilities in a small mall of wholesale handbag makers, we noticed a big sign advertising chanta mart.  I remember my Nona calling her handbag the chanta!

The synagogue was an obscure door and to pass you had to know to the security guard behind the non descript grey gate.  As we were Haim’s guests, they let us in.  The building was very old and in the entrance was a little Midrash for daily prayers.  The main sanctuary had a large elevated Teva (where they read the torah scrolls) There were exactly 3 steps on two sides of the Teva square.  What 3 steps are significant of escapes me now.

The gallery was an exact square surrounding the Teva with cushioned banquets lining the walls.  There were also banquets on the perimeter of the Teva.  The floors covered in old well worn Turkish carpets.  The ceiling adorned with turquoise, gold, and blue designs festooned with many low hanging chandeliers created a welcoming and somehow familiar environment.

The Hazan (the cantor who chants the service) had a melodious voice in a baritone.  I closed my eyes and transported back to my childhood in Seattle.  We met all the 15 or so attendees after services and a brief tasting of Huevos Haminados (traditional Sephardic hard boiled eggs with onion skins) and boyuz de spinaca (spinach filled pastry) together. Walking back towards the hotel we took a detour past Shabatai Tsvi’s house and some ancient ruins being excavated. After crossing the street, we entered a more narrow kind of area that was the old Juderia.  I wished I had a few million dollars to give to restore all the old congregations and community buildings.  There was a thriving community in Turkey of over 500,000 Jews and now a mere 25,000 remain, mostly in Istanbul.  The few thousand in Izmir cannot maintain all the old structures.  We passed no less then 5 old kilahs (synagogues in just a few blocks.  When we passed the old community center where the chief rabbi resided, now abandoned, Haim says he remembers the beautiful tile floors and playing there as a boy.  A bright spot in all of this is a restoration of one kilah originally built with money from Donna Gracia Nassi.  Google her.

Coming out of the Jewish district, we entered the fresh produce market with a covered bazaar, full of open air stalls., Produce, led way to fish, then wedding dresses, shoes, jewelry, lokum, halva….. It was now 85 degrees and humid as heck, Haim walked us back to the hotel, a beckoning oasis and we bid farewell.

We rested for a bit, had some lunch and then left walking to cousin Haim’s rug store.  We passed the rest of the afternoon visiting and learning about rugs.