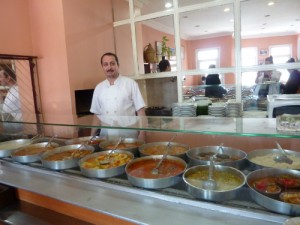 Friday morning promised a beautiful day, after a night of a night of soulful Turkish singing and then the 5:00 AM muezzin call to prayer coming from the outside our hotel room window I was glad our guide wasn’t coming until 9:00AM.  Another fab breakfast, they make the best cheery jam here; Turkey is famous for its cherries.

Today I am lucky enough to have the owner of the tour guide company Isak as our personal guide.  Isak is a kindly 72 years young Sephardic man who has owned a tour guide business with his wife for 40 years.  He knows his way around!  He speaks flawless English, Turkish, Ladino, French, Arabic, and Hebrew.  We hopped in our trusty red Toyota station wagon, first stop, the Jewish Museum. Istanbul is full of wide boulevards, but he side street are often perilously narrow so after the driver dropped us off he could not park the car.  We will arrive at the local on foot and will summon the driver by phone when we finish at our stop.  The Jewish museum is an old synagogue (Zulfaris), hidden behind nondescript doors with security screening after entering.  Istanbul is very security conscious after a bombing some years back at the Neve Shalom Shul. Entering the hall after climbing some steep stairs, we could see the original sanctuary had a beautiful domed ceiling.  The place was full of historic relics of the community, wedding photos, newspaper clippings, clothing, Torahs, rimonim (Torah finials), just wonderful things.

Onto the Dolma Baci Palace.  Dolma means filled in Turkish and this palace is a palace and garden (baci) built on filled reclaimed land at waters edge.  The Sultan built this palace in the early 1800’s in a more European style full of incredible chandiliers.  No pictures allowed.  He was the last Sultan and was banished from Turkey when Ataturk created the modern nation of Turkey.

Isak summoned the driver and he appeared where we were waiting on a busy boulevard.  Next stop, Haggia Sophia.  Haggia Sophia appears pink on the outside because of it brick construction. It is famous because it was originally built as a very large church with a classic nave design basilica by the Emperor Justinian, when the Muslims came to power the church was converted to a Mosque.  Since Ataturk (the first modern president of Turkey who made Turkey a secular republic), the place is now a secular monument for its incredible architecture and art.  You do not have to remove your shoes to enter or cover your hair.  The marble floors once covered in oriental carpets for prayer are now bare.

Once in the door, my mouth fell open, similar in grandeur to St Peters Basilica in Rome, but not as large the domed ceilings are covered in gold with painted scenes of Christ etc.., and the stained glass windows in intense jewel tones are amazing.  Tile work, balconies, carving, makes for further adornment.  The main head of the sanctuary faces east to Jerusalem, but the Muslim arc is just a couple of degrees to the right facing Mecca.  Huge medallions inscribed with the names of various Sultans attach to some of the front balconies.  The Haggia is packed with tourists.

It is time for lunch and Isak led us back toward the Egyptian Bazaar where there is rumored to be a kosher restaurant. We walked across a square filled with huge planters filled with tulips.  Originating as a Turkish wild flower, Tulips and were later exported to Holland.  The tulip motif adorns much art here in tiles, on porcelain in painting.  This week was the perfect week to see the tulips in bloom.  Every boulevard is lined with them and here in this square a riotous array of colors is displayed, beautiful.  The Turkish people are avid gardeners.  There are garden shops selling soil, all the tools, and plants everywhere.

On the other side of the square, I looked up and in the second story window is red sign LOKANTASI (restaurant) LEVI KOSHER.  We climbed the steps and walked in. The mashgiach was sitting in a corner and Mr. Levi with a classic Turkish mustache and a white coat was manning the kitchen.  We picked out are lunch from a hot buffet.  Kuftes, rice, imam biyaldi (stuffed eggplants) with tomato sauce, kufte de prassa, anjinaras, and borekas de meranjena.  Everything tasted like Nona food.

Next to the Grand Bazaar, I could have spent 10 hours in there, but we limited ourselves to 2 hours because it was Friday and we had an invitation to attend Shabbat dinner at the Chabad Rabbi’s house for dinner. In the bazaar, I am on sensory overload.  3500 shops of gold, silver, scarves, embroidery, kaftans, and Turkish Chini plates, on and on…I love to haggle, and once you get into serious talks, the merchants graciously serve tea.

We returned to the hotel exhausted and laden with our treasures.  Isak drove us by the Rabbi’s condo so we would see how to walk there for this evening’s dinner.  The driver dropped Isak at his condo and then took us back to the hotel.  Both Isak and the Rabbi live in very fashionable and upscale Nişantasi district.

After cleaning up and putting skirts on, we walked out of the hotel at 7:50pm.  We were expected for dinner at 8:30pm and although in the grid map in my head I knew there must be a short cut we walked the long way around like Isak showed us by car, so for sure we wouldn’t get lost.

Rabbi Chitrik or Rabbi Mandy as he is known in the community lives in a huge marble floored condo in a new building at the top of a hill with his wife and 4 little children.  The Rabbi, although not Sephardic, entertained us with some Ladino songs.  We walked back to the hotel using the shortcut we figured out.  So many inviting shop windows…  Istanbul is perfectly safe to walk at night in this district.  Talk to you tomorrow.