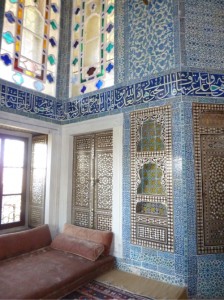 April 25th, our last day.  We decided to meet Isak early even though we stayed up until 1:00am the night before.  8:00am came very early indeed.  Today we have a busy agenda and there is some street closings midday because of the Istanbul Marathon.

First stop the Blue Mosque-so named because the interior is covered in exquisite Iznik ceramic tiles in shades of blue, turquoise, and Turkish Red.  We removed our shoes and donned head scarves.  This is an active mosque and the carpets stay clean when no one enters with shoes.  I marveled at the stained glass windows, arches, domed ceilings, and intricate design of everything.  Isak tells us that in times past, a Jew in need of a place to pray could enter a mosque and use the premises. The Blue Mosque has left me breathless and as we walk to the famous cisterns, we pass an obelisk that marks the center of Istanbul.  In ancient times, the distance from this point to all others such as Jerusalem, Mecca, and Rome was posted on this obelisk. The cisterns are several acres of underground water storage built in the time of Emperor Justinian.  The water was stored in sufficient quantities, but in the end, the Turks took over Istanbul-Constantinople- by using a superior strategy of hauling their fleet overland to avoid the harbor blockade and counter attack.  Justinian cannibalized many pagan temples and other sites for the hundreds of columns that support the roof of the cistern.  The cistern is a basin collecting and storing the filtered rain water.

Its time for lunch in a beautiful garden.  After lunch, we had one more site not to be missed.  We headed for Topkapi palace.  Gardens surrounding the huge palace that housed over 5000 people were planted beautifully and carefully tended.  Topkapi is still being restored as it was abandoned by the Sultan in the 1800 for the newer and European styled Dolma Baçi (Fill Garden) palace built on land fill into the Bosporus. Topkapi is divided into sections, the Sultans quarters, the Harem, the eunuch’s quarters, the kitchens, and Hamam (Turkish bath).  If you like Turkish design this place is for you.  The highlight of Topkapi is 4 rooms full of the Sultans jewels, his swords, daggers, and jeweled tea pots, everything encrusted in rubies, diamonds, and emeralds.  One diamond is 86 karats and was found in the dirt after a rain storm by a humble spoon maker.  There were multiple golf ball sized rubies, and egg sized emeralds. It was time to shop a little more for our last souvenirs.  Since the Gran Bazaar is closed on Sundays, we discovered a little street of shops on our way back to meet the driver and car.

Now finally back in the car, our driver speeds through the twisting streets from the Topkapi in the old city on the point where the Bosporus connects to the Golden Horn out to the Ortukoy district to make the 3:00pm Bosporus cruise on time.  The traffic was a snarled honking mess but we made it on time.  To reach the ship we walked down a crowded street lined with Turkish fast food vendors.

All around young couples and families are eating and walking enjoying their Sunday afternoon outing.  What are they eating you might ask?  There are baked potato places with huge yellow fleshed potatoes filled with your choice of toppings.  Choose from green olives, black olives, corn kernels, tomatoes, bulgur pickles, cheese on and on.  Other people were eating fresh hot waffles, hot of the waffle makers you can pick your fillings, chocolate spread, hazelnut, pistachio, then pick your fruit, strawberries, bananas, kiwis and other things like whipped cream were some of the choices.  The cook spreads your waffle with whatever you pick then fruit toppings and then he rolled it up into a cone and wrapped it in foil.  I took a few heavenly bites. It was time to return to the hotel and pack.  We settled up with Isak and went upstairs. See you all at home.