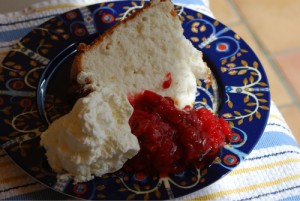 Angel food cake, an ethereal sweet confection with a hint of vanilla and almond flavor is prefect for summer parties.  Served plain, with strawberry rhubarb compote, or just sliced berries it is a dessert with no calorie guilt.  If you are not worried about calories, put a spoonful of whipped cream on the side.

I confess, in the past, to using a mix because I thought it was difficult to make this cake.  However, lately there are no non-dairy kosher mixes available and most contain some ingredients I don’t want.  The ‘store bought’ angel food cakes have a chemical after taste and are missing that fresh baked component.  Knowing that angel food cake has 12 egg whites, sugar, and cream of tartar, in a eureka moment, I searched the internet for a recipe and settled upon this one from eHow.com as being simple and straight forward.  The results were beautiful and the cake had the exact flavor I was searching for.  I have made it many times since and it always turns out consistently great. 1 and ½ cups of powdered sugar (confectioners)

1 and ½ teaspoon cream of tartar

Preheat the oven to 375º.  You will need a stand mixer like a Kitchen Aid and an Angel Food cake tube pan, the one with the cone in the center and removable bottom.  Measure the Cake Flour (like King Arthur brand in a box) and the powdered sugar into a bowl and set aside. Carefully crack each egg and separate the whites from the yolks.  Do not get any yolk in the whites, as they will not beat up after.  Measure the egg whites to 1 and ½ cups.  Place the egg whites in the clean and dry mixing bowl of a stand mixer.

Add the cream of tartar, salt, vanilla, and almond extract to the egg whites.  Begin beating the egg whites with the balloon whisk on medium until it starts to thicken, then increase the speed to high and continue to beat until there are firm peaks.

Change the speed to the lowest setting and gradually add the granulated sugar until the sugar is mixed in.  Now, with the mixer still running on the lowest speed, add the flour, powdered sugar mix by spoonfuls carefully, a few at a time, so as not to deflate the egg whites.

When the flour is just incorporated, pour and scoop the mixture into the angel food cake pan.  This is one cake pan you do not grease.  The egg whites need dry greaseless sides to climb high while baking.  Smooth the top.  To remove the air pockets from the mixture eHow recommends cutting into the cake mix in a few places using a thin knife.

Open the door of the preheated oven.  Remove the extra oven racks.  You only need one on the lowest setting.  Place the cake in the oven and bake for 30 minutes.  The cake will be puffed and golden.  Remove the cake from the oven and place it upside down on little legs that are on the pan or place the center cone of the pan over the neck of a bottle to support the cake in the upside down position. Wash and dry the rhubarb stocks.  Wash and stem the strawberries. Dice the rhubarb into 1/2 inch pieces and cut the strawberries into quarers.  Place the strawberries, rhubarb and sugar in a sauce pan on medium heat.  Melt the sugar and then cook until all is blended and bright fushia color and thickened, about 10 more minutes. This keeps great in the refrigerator for up to 4 days and you can freeze it with success.