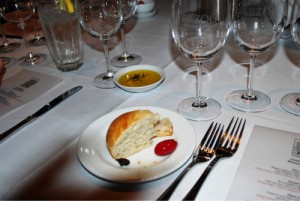 Tuesday night, big girls’ night out- ever in search of good foreign films and an interesting bite out, my group of girlfriends is a fun bunch to get together with each week.  A couple of weeks ago, after reviewing an email I received about a special winemakers dinner to be held at the Baron Herzog Winery up in Camarillo, California, I queried my movie friends if they would like to forgo the movies and dinner one Tuesday and instead step up for a little adventure and attend the Winemaker’s Dinner.

Departing for Camarillo, located north of Los Angeles just a couple of miles inland from the Pacific Ocean, we were dreading the rush hour traffic.  Two of us rendezvoused at my house at 4:00pm and 2 more joined in, when we picked them up in a brief freeway exit at the park and ride across from the famous Skirball Museum.  Now a car full of four, it was 4:30pm as we hopped back on the freeway and continued out the 405 to the San Fernando Valley.  We merged onto the Ventura freeway (101) North bound and much to our surprise after only a very few moments of traffic, it dissipated.  There was relatively clear sailing ahead, while the East bound Ventura Freeway was a parking lot.

After leaving the freeway at the exit for the Camarillo outlet mall, a little excitement was palpable in the air.  Allowing plenty of time for a lot of traffic, our clear sailing left us with an hour and one half to peruse the bargains at the outlet mall stores and let our appetites build before the dinner was to start.

We left the mall after a bit and since the winery and restaurant is located only 2 exits down the freeway from the outlet mall, we didn’t need much time to drive to our next stop.  Upon leaving the freeway behind, we drove down a long straight road lined with verdant green fields full of vegetables.  The outcropping of winery buildings soon became visible.

The dinner began at 7:30 in a private enclosed patio with one large table elaborately set.  The winemaker, a bona fide person who actually decides how to craft the wine and an 8th generation gentleman of the Baron Herzog winemaking family were in attendance.  The winemaker introduced each course that he and Chef Todd Aarons had collaborated on to pair with each particular wine.  The whole tasting was of Cabernet Sauvignons with varying degrees of fullness and youth or aging properties.  The wines paired with appropriate red meat dishes flavored and cooked to compliment each other.  There was bread and olives cured on the premises to taunt the palate before the first course was served.

Carpaccio of Wagyu beef artfully placed on stark white china, flavored with fresh tarragon and black truffle oil, arrived with one fried polenta chip on top and some roasted grapes and garlic cloves scattered around.  The waiters poured the first glass of Cabernet a Herzog Limited Edition Clone No. Six Cabernet Sauvignon, Chalk Hill 2007.  It was light and clear red with citrus overtones.  The wine was wonderful with the flavorful beef.  By the way, this is a very kosher restaurant!  I was unaware of the existence of kosher Wagyu!

Second to arrive, a delicate slice of calves’ liver charred on an open flame, topped with a glutton’s treat of braised lamb belly done in red wine and cherries.  The salty fatty lamb was heavenly with the cherry red wine reduction.  The selection poured with this excellent plate was Herzog Single Vineyard, Haystack Peak, Cabernet Sauvignon, 2007.  A little richer mouth feel than the wine served with the first plate, but liver and lamb belly are much stronger flavored then Wagyu.  This wine is from grapes from a single vineyard, no blending.  The Haystack Peak microclimate imparts its own unique flavor qualities to the grapes, since Haystack sits up in the fog most days until around 10:30 am. After the second incredible course, it was apparent that, my knowledgeable friends were notably impressed by the food and the wine.  To see a man who looked like an orthodox rabbi swirling and tasting while being eminently knowledgeable about food and wine just added to the splendid atmosphere of the evening.  Let’s break those stereotypes. Next a baby lamb chop from a rack, thick, pink, juice dribbling out, it arrived crusted in an espresso chili rub.  Placed on top of a South American corn cake, the double cut lamb chop sat in a pool of dark mole type sauce with a hint of cocoa and smoky chili taste.  The wine, Herzog Limited Edition Cabernet Sauvignon, chalk Hill, 2007, has just been released in a very small limited edition for the first time.

Unbelievably, there was still more to come.  A glass of another young wine that will greatly benefit with aging, Generation VIII by Herzog, Cabernet Sauvignon, 2004 was served next.  It is rackable, and promises to improve with age.  A deep, smooth, intensely colored wine that has already aged 32 months in special barrels.  This wine accompanied my favorite dish of the evening, a succulent saddle of venison crusted in mustard and fennel seeds sitting in venison ragout.  On the side, a braised fresh fennel bulb was ready to melt in my mouth and the whole plate was sauced with a blackberry gastric from the first local blackberries of the season, quite a compliment to the wine. One last wine was served with this dish as well.  A wine not quite ready to drink yet but the winemaker was very excited to share a taste with us.   He explained that he had made a fortuitous purchase of the grapes from this very small but famous vineyard.  This single vineyard wine was aged 20 months in strong flavored oak barrels before bottling and now has substantial tannin.  The tannin will mellow over time as the wine gains a bold, rich, sophisticated flavor.  Generation VIII by Herzog, Cabernet Sauvignon, To Kalon Vineyard 2006

Lastly a bit of dessert, to change the palate back from all the strong tastes.  Dessert was a lighter then air vanilla pastry cream in a tart shell topped with grilled black mission figs and drizzled with truffle honey.  That’s it.  Fabulous.

The conversation sputtered, the hour was late, and we had along drive back.  Our bellies were full and content.  What a fun evening!  The restaurant is open for regular dining as well as hosting a calendar of special dinners all year.