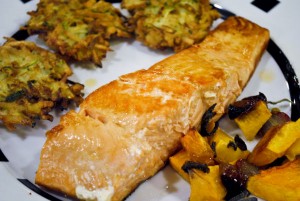 Dinner for the eighth night of Hanukah was just going to be the four of us. I was looking for inspiration.  I considered the many nights of heavy eating, what about some fish for a lighter take, then I thought about the few zucchinis still left in the refrigerator along with some squash.  I settled on menu, festive, part healthy and light and yet it was still Hanukah so one last fried bite. This is how I made the zucchini latkes, I found that they stay together much better if you add a potato to the mix and squeeze out the moisture. Preheat a large non-stick sauté pan.  Add vegetable oil to the pan around ¼ inch deep.  Working quickly with your hands, combine the grated zucchini and potato with the flour.  Gently form latkes and slip them into the hot oil.  When the underside appears golden turn the latkes and fry on the other side. Serve hot with applesauce if you like. Follow this link to the Sufganiyot or doughnut recipe in a recent Letit’s Culinaria post. It is a recipe from Joan Nathan.