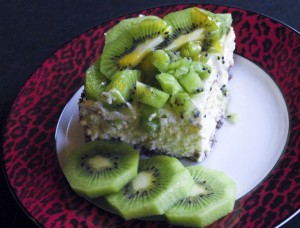 The vivid jewel tones if kiwi fruit dress up any holiday or party dessert buffet.  Cheesecake, always a favorite, takes on a twist using this exotic fruit as the topping. Since I like to bake, a dessert buffet is always an option as a standalone party or a show stopper finale to an elegant dinner or brunch. Take the cream cheese and eggs out of the refrigerator at least one hour before you plan to start the cheesecake so that they reach room temperature.  Preheat the oven to 350º.  Combine finely chopped pecans and melted butter and press onto the bottom of a 9 inch spring form pan to form the crust.

In the mixing bowl of a stand mixer, beat the room temperature cream cheese until it is smooth and fluffy.  Add in the sugar, eggs, egg yolk, lime juice, and vanilla.  Beat until smooth.

Combine the kiwi jam and spinach leaves in the bowl of a mini processor.  Pulse the jam and spinach leaves until it becomes a smooth green puree and then add it to the cream cheese batter to turn it a little green. Even simpler if you want to skip this step, you could use a few drops of green food coloring gel or paste. Turn on the mixer for one more moment to combine the puree and the cream cheese.  Pour the cream cheese batter into the crust.  Set the springform pan on a baking sheet to catch any dripping butter.  Place the cheesecake into the oven.

Bake for 40 to 45 minutes until puffed and golden.  Remove the cake from the oven and let it sit for 15 minutes while you prepare the topping.  Leave the oven on.

For the topping, stir the sour cream, vanilla, and sugar together. After 15 minutes, carefully spread the topping on the hot cake, leaving a 1/2 inch border at the edge.  Return the cheesecake to the oven for 5 more minutes.  Remove from the oven and let the cake cool.  Refrigerate in the pan, for at least 24 hours or 2 to 3 days for best results. Several hours before serving, peel the kiwi fruit.  Slice some of the kiwis in half or full rounds.  Dice up the remaining kiwis.  Decorate the top of the cheese cake with the various cut kiwis.  Using a sharp knife go around the perimeter of the cheesecake to loosen from the pan, then release the spring form pan, and remove the cake.  Place the cake on a serving platter.

In a small sauce pan or in a glass bowl in the microwave melt the orange marmalade.  Using a pastry brush to paint, spread a little melted jam on the top of the kiwi to make them shiny.  Refrigerate the cake until serving time.  I put the kiwis and glaze on the cake on the day I am going to serve it.  Enjoy.