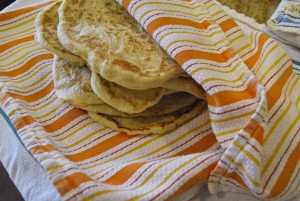 Bread the Staff of Life.  After the Passover drought of leavened foods, fresh bread fills the nostrils with the earthy aroma of yeast and delights the mouth with a sublime taste that satisfies some imprinted human instinct.

I decided to make some Laffa, thick pillows of chewy bread, freshly cooked on a griddle or bottom side of a wok or cooked simply in a frying pan. I confess I never made my own Laffa until this attempt so I did a little research.  All of the recipes I found seem to be about the same only different quantities of flour with the rest of the ingredients in the same ratio.  Incidentally, to learn more about the concept of Ratios in cooking there is a brilliant book by[amazon_link id=”1416571728″ target=”_blank” container=”” container_class=”” ]Michael Rhulman[/amazon_link] called Ratio. Most recipes out there are short on instruction and very brief, leaving a lot to the discretion and experience of the baker to decide.  I made the crust three different ways.  It is good thing that you can freeze Laffa since after three batches and one being a double batch I made quite a bit of Laffa.  First I used a Cusinart, then a Kitchen Aid Stand Mixer, and finally I kneaded the dough by hand.

In all three methods I added the dry yeast, sugar, and salt to the unbleached bread flour first and then added the liquids. I wanted to see if the method of kneading affected the outcome of the dough for better or worse.  All three methods worked great.  So whatever machine you have in your kitchen will do the job and if you don’t have a machine your hands are the best.

To make 12 pillowy Laffa you will need: Combine the dry ingredients.  Add the oil and water and if you are using a food processor process for about 60 seconds until a very smooth, soft, and slightly sticky ball forms. If using a mixer, mix with the dough hook until the dough is very smooth, soft and elastic.  If making by hand; after you add the liquid ingredients to the dry ingredients, mix by hand in the bowl for a few moments until well combined and coming together.  Turn the dough out onto a lightly floured surface and knead for about ten minutes until smooth and elastic. In all cases after the kneading, place the dough in an oiled bowl and loosely cover with plastic wrap.  Then cover the bowl with a tea towel and place it in a draft free warm corner so the dough may rise.  In about an hour, when the dough has doubled or more, punch the dough down.  Divide the dough into 12 equal balls, and then roll the balls until smooth.  Place the balls on an oiled cookie sheet.  Cover them with a damp tea towel and let the dough balls rest for about ten minutes.  Resting makes the dough easier to roll out. Pre-heat a flat surfaced grill pan to medium.  Alternatively you can use an upside down wok or a plane large frying pan.  I found that the large non stick grill pan was the easiest to work with.  Take a ball of dough in your hands and flatten it out on an oiled wood surface.  Roll it out with a rolling pin or use your hands.  Make a circle about 12 inches in diameter and place the Laffa on the hot grill surface.  When you see the edges looking dry and the bread is poofing up turn it over.  Laffa only takes a few minutes to grill.  Place the finished Laffas in between some kitchen towels to keep warm. You can freeze Laffa and also reheat them.  You can cut this recipe in half.