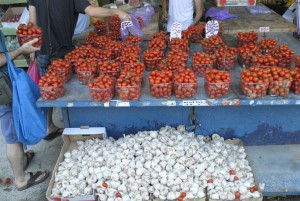 Hi all, Michael and I  have been on vacation since the beginning of June.  We left Los Angeles had a 12 hour layover in Frankfurt, Germany and then landed in Tel Aviv on June 10th.  We spent time in Tel Aviv and using our hotel there as a base, we visited Herzalia, Hod Hasharon, and Yafo.  We went by private car up to the Galil and the Golan and stayed over one night at a kibbutz, Ha Gushrim and visited the Banyas (the head waters of the Jordan River).  Mostly we visited family and ate fantastic food.

We left Tel Aviv in the middle of the night on the 14th or the morning of the 15th and flew to Rome. In Rome we walked the city from our hotel near the Piazza de Popolo, up the Via del Corso to the Via Condotti. Continuing up to the Spanish Steps, we climbed them and made our way to the Piazza Barberini eating Pizza, drinking espresso, pasta with Porcini and Fiori del Zucca or stuffed zucchini flowers, all the way. Oh don’t forget the sorbetti.

We shopped, looked, and stopped to rest along the way and as soon as it was 7:30 and restaurants opened up for dinner we ate. Dinner included artichokes Roman style, more pasta with Porcini mushrooms, and dessert.

The next morning dawned hot and bright, after a great hotel breakfast buffet, fresh baked goods, jams, marmalades, cheese, fruit and eggs we were fortified to walk some more. In the afternoon we braved the Rome train station and hopped an express train to Firenze or Florence. Today was the 16th. Sorbetti, fresh rolls, cheese, pasta and vegetables, we toured this fabulous city during fashion week in fine gastronomic fashion and even took a short train ride to see the leaning Tower of Pisa, a very tacky tourist town but nevertheless interesting.

After a little mishap in the train station we returned to the Rome Fumicino Airport on the night of the 18th. By mistake we boarded the local instead of the express and a one and one half hour train ride turned into a dinnerless 4 and one half night mare. On June 19th we caught a Czech airline flight to Prague.

Prague is a picturesque jewel, left relatively unscathed by the bombs of WWII. It is small enough to negotiate easily. We ate at least 3 meals a day with plenty of espresso and dessert breaks for good measure. Our hosts wined us and dined us at wonderful venues all over the city including a restaurant terrace with and overview of the city and a black tie ballgown evening at the presidential palace entertainment provided by the Prague philharmonic.

On the 22nd we flew to Budapest and spent a couple more days eating and touring. Budapest is recovering its former beauty, spaning both sides of the Danube river.

Unlike Prague it was bombed during WWII and after the war 40 years of communism further ruined the urban landscape. The city prides itself on its beautiful and flavorful culinary tradition.  Again, our hosts created memories with unbelievable events, inlcluding a private street fair and dinner and a visit to a famed Hungarian horse farm for a Hungarian style farm dinner.

A dinner at the famed Gundel restaruant that has survived through every king, despot, WWI, Nazi’s, and Communists was impressive , as well as a private cooking class the next morning at Gundel made my day.

A drive to the countryside and lunch on Herrand porcelain at the factory, and last but not least a black tie evening at the Budapest Opera House , dinner dancing and entertainment by the Hungarian Philharmonic, the Budapest ballet and opera companies rounded out the few days in Budapest. It was unbelievable!