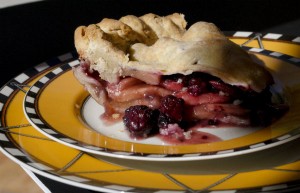 Pie reigns supreme as the best Thanksgiving dessert.  In our home we like pumpkin, pecan, lemon meringue, and apple. I always make one or two new things, just to try them, but we have pie for sure.  Several years ago a new variety of apple showed up in local markets here.  Honey Crisp is everything its name promises, crisp, green, just sweet enough, and tart like it was just picked.  The apples are a beautiful striated red and green color and the meat has a hint of green.  The best eating out of hand apple bar none. The first year they were in short supply.  The second year I made my plan to buy as many as I could store before they deteriorated. The third year, upon the arrival of apple season in the beginning of September, there were organic ones picked locally in the local farm markets and the grocery stores had both organic and regular.  I have had time to try making them into apple sauce, baking with them and sautéing them.  Wonderful!

A little aside; all of this thinking about apples reminds me of my grandmother, my Nona, Behora Louisa Kadun Chiprut (may she rest in peace).  She never quite mastered English and always referred to apple pie as apple pie de manzana. Manzana is apple in Spanish.

I wanted to make a pie with a new twist on it.  In Costco they have been stocking blackberries at a very low price.  They are not the delicious blackberry varieties that one finds in farm markets in the end of summer, however, when baked into pie their flavor perks up and they work just fine.  ‘Blackberry with Honey Crisp’, wow that sounds like I want a big piece, it sounds good for breakfast, lunch or dinner and especially good for Thanksgiving dessert.

3 cups all purpose flour (I use unbleached and unbromated)

Place flour in a medium bowl.  Add salt and sugar and blend. Place coconut oil in the bowl of flour and cut it into the flour until it is the texture of course peas, with little bits of oil not quite blended.  Coconut oil is solid and white like shortening.

Next, combine egg, vinegar and ice water in a small bowl or glass measuring pitcher.  Blend together with a whisk.  Add egg liquid to flour mixture.  Stir together with a fork to moisten all of the flour and then, using your fingers bring dough together into a rough ball, making sure to gather up all flour bits.  There is enough liquid to wet all of the flour and bring dough together.  Divide dough into two balls.  Flatten balls into round disks and at this pint you may freeze them, store them overnight in the refrigerator or chill them for an hour or so after the disks are wrapped in plastic wrap. To roll out pie dough, generously flour a work surface, such as a granite counter top, marble, wood board, or special silpat for rolling out dough. Flour a rolling pin.  Place dough disk in the center of surface and roll out into a large circle, about 12 to 14 inches in diameter.  Dough should be uniform in thickness and very thin.  Fold circle in half and then in quarters.  Place dough in a deep dish 9 to 10 inch round pie plate with point of the fold in the center of the pie plate*. Carefully unfold dough so it covers the pie plate. Press down dough into the bottom of the plate and up the sides, leaving plenty of overhanging dough to seal with the top crust and trim.

Layer filling into the dough lined pie plate.  Fill it generously because filling shrinks as it cooks. Next, roll out second crust.  As before, fold dough into quarters and this time place on top of filled pie plate, then unfold. Press two crusts together around the pie.  Trim excess pie dough to about 1/ 2 inch past pie plate.  Save trimmed dough to make a little goodie with any left over filling.*  Start pressing and folding edge of dough inward to make a thick rim around the pie.  Flute the edge using your thumb and index finger on left hand to pinch dough and index finger to make an indentation.  Repeat this action around the pie.  Make a cross in the center of the top crust with a sharp paring knife to create a steam vent.  Poke some little slits around the rest of the top crust.  Place filled pie plate on a rimmed baking sheet to catch any spills.  Sprinkle with Demerara sugar and place in the oven. Check after about 40 minutes and if crust is getting to dark cover lightly with a sheet of aluminum foil and continue baking for another 10 to 15 minutes.  Pie is done when the bottom crust is golden and fruit juices are bubbling out of the steam vent and over sides of pie plate.

*Any left over filling that doesn’t fit in the pie can be placed in a ramekin.  Roll out pie dough trimmings to make a top crust.

*I prefer glass pie plates and this year there is a new design in the market, very deep with a great rim.  I buy new pie plates every year when they are on special before Thanksgiving and then if I take pie during the holiday season to someone’s house, the pie plate is theirs.