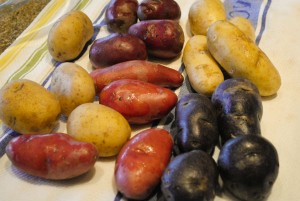 So many fabulous colored potatoes at the Santa Monica farm market makes the choice difficult.  My eye is naturally drawn to vivid color, whether it is carrots, paintings, hair color, or clothing.

Then I had an idea.  The colored potatoes would make a spectacular plate of latkes for a Hanukah dinner.  So Friday’s Hanukah dinner was: I wish you all a Happy Hanukah, Merry Christmas, and Happy New Years Eve

4 pounds of mixed colored potatoes, such as French fingerlings, Yukon Gold, Purple and Red fleshed or any kind of heirloom potato variety. Peel all of the potatoes and set in a bowl of cold water until you are ready to grate them.  Once you start grating you have to work fast so that potatoes will not oxidize and turn brown. Prepare a large cookie sheet covered in paper towel for draining fried latkes. Begin heating a 12 inch frying pan or skillet on medium heat.  Next, grate half of the potatoes and half of the onion into a medium bowl. It is better to make latkes in two batches so that they come out without any gray.

Squeeze out as much liquid as you can from grated potatoes and onion and place them in another large bowl.  Add one half of the flour, about 3 tablespoons, 2 eggs and 1 teaspoon salt.  Now turn frying pan up to medium high and add oil to about 1/ 4 inch deep.  Mix latke mixture with your hands and lightly form a pancake about 2 to 3 inches in diameter and drop it into hot oil. Pancakes will seem like they barely hold together but after they fry for a moment they solidify and you will be able to flip them when they appear to be golden on bottom side.  Flip latkes with a spatula and wait for the other side to appear to be golden.  Remove latkes one by one and place them on prepared sheet to drain in a single layer.  Line another cookie sheet if you run out of space.  Continue until all latkes are fried.

Take pan off heat and change out oil.  Prepare second batch and repeat as above.  If you make them a couple of hours in advance, latkes may be reheated in a low 250° F oven for a few minutes.  I found confetti latkes to be incredibly light, lacy, crispy and almost creamy in the very center.  They were so yummy with the apples sauce made from Pink Lady Apples.  The brisket was melt in your mouth with a rich, earthy, slightly sweet flavor.  We all ate to much as one should on a holiday!