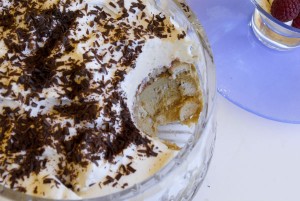 My friend’s mother, Halena, is a woman to be admired.  I posted a recipe of hers some time ago, specifically a gefilte fish recipe.  This time, if you’ve read my post about the eighth night of Hanukah dinner we attended, you may recall I marveled at the Viennese dessert Halena served called Biscotten Torte.

Well today was one of many lucky days I have experienced in this life, and Halena came over, with her little leather bound notebook of treasured recipes with an embossed date of 1957 on the cover, to show me how to make the Biscotten Torte.  Halena is not from Vienna but from Poland.  The recipe came from another old Jewish family from Vienna.  The mother and daughter of that family survived the Holocaust by hiding in France.  The daughter left Paris and found her way to India, where, she met and married her husband.  The couple immigrated to the United States after the war and relocated in Los Angeles. Subsequently, Halena met and became friends with this woman and she shared this recipe.  This is part of another fascinating Holocaust related tale of survival and triumph.

Halena’s little notebook contains a lot of treasured recipes and we plan to get together to bake and cook more. You will need a glass or crystal bowl, straight sided, flat bottomed, about 9 to 10 inches in diameter and about 5 inches deep.  This recipe contains store bought lady fingers.  Lady fingers vary a lot from brand to brand; they are wider, narrower, crisper, lighter or denser.  Be prepared to be a little flexible, buy an extra package or two of lady fingers, since you have to fit them into the bowl.  You need enough for three layers 1 pint half and half

4 tablespoons rum or to taste

5 to 6 ounces of red raspberry jam Open packages of ladyfingers and place on a large plate.  Combine boiling water with espresso powder in a small cup.  Stir to make a very thick liquid-paste espresso.  Some of the espresso is used in the dipping liquid and some is to flavor the buttercream.  Place half and half in a flat bottomed medium bowl. Add rum and 1 tablespoon of espresso liquid-paste to half and half.  Taste and add more rum and or espresso if you prefer a stronger flavor. Set aside and make buttercream before starting to dip ladyfingers. Slice sticks of room temperature butter into 1 tablespoon size chunks and place in food processor bowl.  Add sugar and 1 tablespoon espresso liquid-paste to butter.  Process until fluffy and then, add egg yolks one at a time processing after each addition.  Buttercream should be smooth with no solid butter lumps.  Taste buttercream and adjust the flavor.  Place buttercream in a medium bowl and set aside. Spread raspberry jam carefully over top of layers up to edges.  Next, whip cream in large bowl of electric mixer and when it is almost whipped stiff, add sugar.  When whipping cream, keep an eye on it.  Whip it in a cold metal bowl and be careful not to over whip. Whipping cream goes from stiff to butter in about one second! Spoon whipped cream on top of Biscotten Torte.  With a sturdy vegetable peeler shave some chocolate curls over  top.  Cover Biscotten Torte with plastic wrap and refrigerate overnight.  Serve with coffee after a fabulous meal!

There are many recipes for Biscotten Torte but Halena had the brilliant idea of adding the jam layer at the end.