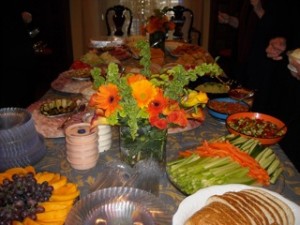 This last week has been one crazy, faith reaffirming, family focused week.   Last Saturday as the Sabbath Queen departed so did my mom.  The funeral was last Monday February 27, as quickly as it could be arranged, per Jewish custom.  My sisters and kids flew in, the family gathered and I gave this little talk with tears streaming down my face and my boys at my side during the funeral.  My mom, Noni, a corruption of the word Nona, grandmother in Ladino and many other languages was laid to rest on a blustery cold day more typical of Seattle with the rain coming down than the City of Angeles (Los Angeles).  The cemetery chapel was befitting her sense of design, very Moorish with heavy Moroccan and Spanish revival interests, wrought iron, heavily detailed flourishes in the archways, stained glass.  I totally understood why my mom liked this place for her final resting ground.  The following is my speech.

My mom was a woman who lived in a time of transition.  She was born #4 in a family of 8 children in 1918 when woman were considered little more than housekeepers and baby makers.  Being first generation American born and growing up in wild Northwest Seattle she knew how to chop wood with an ax for the coal and wood stove and how to pluck a freshly schected (ritual slaughter) chicken, but being the daughter of Behora Azose Chiprut she also knew how to crochet fine lace embroidery on the edges of trousseau towels, make cutwork tablecloths (lavor) and bake Sephardic pastry.

In school she medaled in sports.  She always recounted the story at the big playoff baseball game when she hit the homer with the bases loaded while Papu (her father) looked on with approval.

She fell in love with my dad Jack Capeloto of blessed memory and they married before WWII.  My dad went off to train as an officer in the army and my mom gave birth to my sister Carole while he was in Europe. Nine years later I was born and the 2 and one half years after that she gave birth to Barbara.

My parents had high hopes for a fine life.  My dad was highly educated, a pharmacist and so they bought a pharmacy with a lunch counter in Seattle.  Jean, I will call her that, made parties, serving homemade designer pizzas, before there was such a thing.  She wore platform shoes, loved to dance, ski, could drive any vehicle, and ride a horse.  They gardened, composted before there was an ecology movement and built grape vine trellises.

We picnicked al fresco in parks, beaches; anywhere you could drag food and sit.

To soon the Shangri-La spell broke, my dad became ill and passed.  Barbie was 6, Carole 17 and me 8.  Jean fell into a deep depression.

Eventually she got a grip on it but financial reality set in and we became very frugal.  Jean had to prioritize.  What was important says a lot about her remarkable character.  We all had braces on our teeth, we all had swimming lessons.  She sent us to Shabatons and made sure we were in Cahl (Ladino for synagogue) every Shabbat.

Jean taught us the difference between right and wrong, moral and immoral, she lived in a black and white world and she cut us no slack.

The devastation of being a widow with three daughters took its toll but my mom always held her head high extremely proud of being Jewish and her Sephardic heritage.

We all left home, went to school, married and left Jean to muddle through in Seattle.  Before I was about to have my first child, I prevailed on my mom to move to Los Angeles.

She mustered her courage, drove down with her cherished possessions ready to start a new chapter in life.  My husband’s mother had passed and ‘Noni’ as she was dubbed by Carole’s children was needed here as a Nona. Here in Los Angeles through the aura of sunshine, flowers, and gardens to tend, my mom flowered and eventually at 73 met and married Sam R.  With Sam she found a companion to go on all the trips she had missed, purchased a condominium and had the means to fly around and visit her grand kids.  Sam adopted all of the grand-kids as his own since he had none.  Sam passed in 1998.

Noni is survived by three daughters, 8 grand-children, and 8 great- grandchildren with many more to come.  I feel she led a long fruitful life, no regrets, always sticking to her guns, even down to picking the day she wanted to leave us. The funeral was a week ago and life has moved on.  Purim will be Wednesday and I want to finish my Purim Platicos or Mishloach Manot.  Don’t feel bad, my mom live a good, long, fruitful, adventurous life.  She skated through life with no major disease and died when she wanted by just expelling her last breath.

I hope you all have a wonderful Purim and even if you don’t celebrate Purim hug and kiss your families and enjoy your time on God’s green earth!