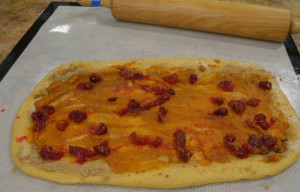 While I was thinking about cinnamon rolls last week I had the idea to make them with pumpkin and cranberry sauce since Thanksgiving is on my mind.  Try these, they are so good.

Any combination of the following, one, two, or three

Place warm milk , sugar, and yeast in bowl of stand mixer. Let milk stand for a few moments until it is foamy.  Add 1/ 2 cup flour to mixing bowl and turn on mixer to medium speed. When milk and flour are combined, add pumpkin puree, eggs, vanilla, salt and remaining sugar and brown sugar.  Beat to combine, and then, reduce speed to low, and add flour 1 cup at a time.  When flour is incorporated, turn up mixer speed to medium until dough is smooth, begin to add in butter 1 tablespoon at a time. The dough takes on a strandy look as the butter becomes incorporated.  Dough should be soft and pliable.

Set dough in bowl aside to rise in a warm corner with a light plastic wrap on top.  I make a nice little bed of dish towels to keep it warm.  Let dough rise for about an hour or until doubled.    While dough is rising prepare and measure out cinnamon, brown sugar, pumpkin puree, cranberry sauce and pecans.  All of the filling measurements are for two rolls of buns, since the dough is split in half after it raises.  Note: cranberry sauce should be very jelly like since too much liquid would be hard to roll up inside.

When the dough is done rising, gently push it down and remove it from bowl to work surface.  Cut dough in half to form two pieces.  Each piece can be rolled out to an 11 X 16 inch rectangle.  I prefer to roll dough out on a large Silpat.  Once you have a large even rectangle, spread it with 3 tablespoons of soft butter. Spread  butter to within 1/ 2 inch of edges. Sprinkle 1 and 1/ 2 teaspoons cinnamon over dough.  Scatter brown sugar over the surface. Next, either spread pumpkin puree evenly or drop it in spoonfuls over dough.  Do the same with cranberry sauce.  Add pecans or dried cranberries if you like.

Beginning on the long end, roll up dough into an even cylinder.  Pinch the seam shut.  Using the palms of your hands pat the two ends of cylinder to compact them and make that last piece more even.  Slice each cylinder into 8 rolls.  You can use a knife, but to avoid tearing the delicate dough, try a scissor or some dental floss that you slip underneath, cross and tighten.

Place the cut individual rolls in 9 inch cake rounds that are greased with additional butter. A spring form pan works well also.  Place cake pans with rolls back in warm corner to raise a second time.  When they have doubled in size they are ready to bake. Bake in a 350°F oven for about 25-30 minutes until dark golden.  We prefer ours without icing, although I might make some caramel to drizzle on top.

For classic icing mix 3 cups powdered sugar with about 3 tablespoons of milk.  When the consistency is how you like it, you can spread or drizzle on cinnamon rolls.  Variations, add a drop of vanilla or cream in some room temperature butter.