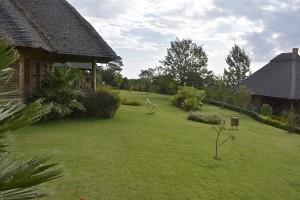 Today the sun came up right at 7AM.  Clear and bright with a delicious chill in the fresh, green smelling mountain air.  We showered and smeared ourselves with sun screen and bug repellent, then, dressed in our beige(my favorite color, not) safari finest.  Breakfast was scrambled eggs with toast, peanut butter, jam, coffee and fresh pineapple juice.

Ombeni our fantastic guide arrived at 8:30 in his trusty Safari Land Cruiser with a cooler full of Kilimanjaro water on ice.  Beni went to the kitchen of the lodge and picked up our box lunches for later and we were ready for what promised to be a special day. First, we went up the mountain road about 10 minutes to the entrance of the Ngorongoro Crater National Park.  We hopped out of the vehicle for a few moments while Beni paid the fees and filed the necessary documents allowing us to enter the park.  They have a great gift store and bathrooms of course. Proceeding up the unpaved mountain road for about 20 minutes to a high altitude observations point, we stopped for a photo opp.  At the observation point the jungle was on one side and on the other a huge spectacular crater or caldera of a 2 million year old now extinct volcano lay below us. As we drove up higher and higher a rich tall tree canopied jungle was visible off the edge of the narrow winding path. The floor of the crater is a more or less a closed echo system and introduction of any nonindigenous animals, birds or plants is prohibited. No hunting is permitted and one is not allowed to leave any trash behind or feed the animals.  It is pristine.  This crater or valley contains what is said to be the Garden of Eden, the real one.  Looking down from the rim of the crater I saw a kind of hazy view of small ponds or lakes and black dots on a dry plain. Beni said there are two ways down, the slower careful way and the more curvy steep way.  We settled on the slow way down and curves back up. We descended cautiously on the unpaved road and watched the terrain change from heavy foliage and green all year growth to more arid and dry until we reached the bottom.  The bottom of the crater is basically flat savannah with grasses, mostly dry retaining a bit of green close up waiting for the rainy season to return. The land scape is dotted with small ponds streams and lakes fed by underground springs.  The black dots turned into herds of Wildebeest, Zebra, Water Buffalo, a huge array of animals growing larger in numbers the further we drove in. This truly is the Gan or the garden, I made a little prayer in my mind. On the left a Thompson Gazelle, on the right Zebra, oh babies, up ahead Wildebeest, not afraid of the vehicle approaching, just grazing, frolicking, whiling away the afternoon on a sunny day.  Never mind the thunder clouds building in the distance.  We drove on rutted dirt roads exposing the bright red soil of the crater floor.  The road on the rim of the crater had been bright red with oxides as well.  A group of huge Water Buffalo sat placidly near the Wildebeest chewing their cud, huge light gray curled horns framing their faces giving them an expression of wisdom.  Did you know they say wildebeest are gods garbage pail animal.  That after the other animals were created in all their artistic beauty, the leftover parts were thrown together to create wildebeests; stripes on their necks from zebra, parts from water buffalo, parts from hyenas…but no brains. There was a lot of chatter in Swahili with Beni on his two way radio and then, Beni drove like crazy cutting down different paths to arrive just in the moment as a pack of hyenas took down a large wildebeest. The animal moaned and shuddered as the hyenas tore at the underbelly.  Dipping their heads in the warm entrails they shook their heads dripping in the blood with glee.  Other hyenas and jackals were soon on the scene but intimidated away by those that actually made the kill.  The gore and the shock of reality were incredible. Now it was close to lunch time so Beni began to make his way to a hippo pond where we could find a bathroom and a place to picnic.  We saw black Rhinos in the distance. The variety of animals and their lack of fear was amazing.  This place is heavily patrolled by park rangers.

Continuing we saw a couple of lionesses in the distance.  As we approached the count was about 4 lionesses and their cubs.   They decided to get up and go for a drink.  The watering hole was on the other side of the road.  In utter astonishment I realized the lions were threading their way through a group of Safari vehicles such as ours, fearless about crossing the road.  One lioness lagging behind the group swaggered across after the others.  She was not more than a couple of feet from our closed windows. Later, when we reached the Hippo pond the thunder clouds that had been in the distance arrived rather rapidly and it started to rain.  The Hippos were submerged in the pond with just their eyes peering above the surface of the water.  Eating our boxed lunch picnic in the car like I used to do as a child in Seattle since every Sunday we had Fish and chips at the beach rain or shine. Next, Beni got another heads up on his radio and we drove like mad, only now the road was pure mud with the ruts becoming deep black mud traps.  A group of other vehicles were parked on the side of the road as we reached our destination. The Cruiser is specially designed for this rough terrain.  A lesser vehicle would have been totally stuck in the muck.  It was the back side of the watering hole where the lions had crossed the road previously.  The next scene was incredible.

At least 5 lioness and their cubs we savoring a huge freshly killed water buffalo they had coordinated as a group to take down, not a male in sight. Cubs were licking the red flesh where one of the adults tore the skin to give the cubs access.  A scuffle ensued when an interloper lioness tried to get in on the action.  The skin of the water buffalo is very tough so the mother lioness tore open a patch to let the cubs have a place to dig in. We are one of the luckiest groups Beni has ever taken out to see 4 of the 5 top species in one afternoon and two kills.  The 5 species being, Water Buffalo, rhino, lion, elephant and giraffe and super six, leopard. The elephants we saw from more of distance, but the lions and water buffalo were up close and personal.

This truly is the Gan Eden with all of the life and death drama, beauty, thunder lighting, sunshine and birds as if the earth was just created.  Beni drove on after we were mesmerized by the lion kill for about 30 minutes.  Now he seemed to leave the other vehicles behind and drive to his remote secret spot, the roads began to dry and the mud subsided.  Now there were only puddles in the ruts.  We arrived at a pond surrounded by lush marsh grass and plants and low and behold the elusive hippos, about 30 strong were huddled together in water shallow enough that their bodies were exposed.  Their heads were submerged as they had a group rest all the while noisily passing gas.  The amount of flatulence was comical.  We observed in silence and wonder for a while.  It was now around 3PM time to start heading back to the lodge.  Beni, still had one more incredible surprise for us. We passed another rather isolated spot on our way back to the exit road of the crater and to my delight a huge lion and his queen were lying in the grass without a care in the world.  They had probably just mated.  Another once in a lifetime lucky find.  Out of the super tall grass behind them came another lion.  The lions did not duke it out, instead the second one turned as if to say excuse me and went on his way.  This only happens if the lions are brothers and don’t threaten each other’s marked territory. Now with memories to last a lifetime Beni headed for the curvy hairpin way out of the caldera.  Bright red earth was exposed on the sheer side of the road and on the other side a sudden death if you should fall of the road.  Again the plant growth changed as we drove up back to the lush green. When we returned to the lodge we were mentally and physically exhausted.  We showered the dust off and had dinner in the dining room at the lodge.

We slept in a huge canopied bed with mosquito nets.