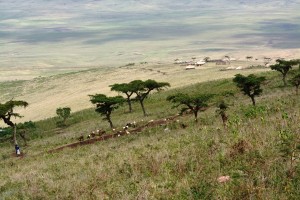 After another beautiful breakfast on the veranda at the Explorean Lodge before we headed out. The day was clear and bright, perfect temperature still in the 60’s in the AM.  We headed up to the Ngorongoro Crater and had to pass through the gate and pay the fees once again to enter the national park.  Up through green jungle we climbed looking at red earth and trying to spot water buffalo in the lush plants below.  We skirted around the rim for a ways and then, descended.  We crossed the crater floor and then today we veered left to take the road out of the crater on the other side.  We climbed out of the crater into the Ngorongoro area on the south side heading for Serengeti.  No looking for animals to get close to today we had a long drive ahead of us. The ground was dry, fine dusty soil, covered in small plants, grasses and many varieties of Acacia trees.  Some trees had huge thorns and adaptations to keep the animals from bothering them.  One, a scrubby short Whistling tree had little hard pods with holes.  When the wind blows it whistles through the pods ergo the name.  The pods are home to ants. After about two hours on the road I had to relieve myself, but there are no facilities so we had to opt for ‘bush toilets’ as they are called.  Beni looked for a secure place with no lions lurking and no Masai wondering around.  I jumped out of the cruiser and found a bush.  I think something bit me because, in that one little portion of my upper thigh usually covered by my pants, and not smeared in bug repellent I had a swollen red hot bump.  Not itchy or painful but a bite never the less. We jumped back in the cruiser and drove back to the road.  The ‘road’ is not paved, any vehicle we encountered coming or going kicked up a huge cloud of dust which promptly landed in my hair, on my face, you get the picture.  They call this kind of driving ‘African Massage’ as each bone in my body was jarred and bumped and shaken not poured. In a while the hills gave way to perfectly flat terrain as far as the eye could see.  We passed giraffe, wildebeest, zebra, and gazelles.  Finally we reached the edge and again there were trees and plants. We passed more giraffe, zebra, not stopping for pictures.  Eventually we reached our destination, the Lake Masek Lodge on the upper edge of Lake Masek. It is beautiful and peaceful.  The lodge consists of 20 guest elevated tents and the main building with dining facilities and a Gift Shop.  After we checked in we sat down to a beautiful lunch buffet and we ate out on the terrace overlooking the lake.  Fried fish, salad, cooked vegetables, yellow lentil soup and rice and green beans, just great!  The manager informed us not to drink tap water here or use it to brush our teeth.  He said it is fine for showering, but stick to the bottled Kilimanjaro water for drinking and brushing our teeth.  The water is clean but we are not used to their local bacteria.  The kitchen uses bottled water for all cooking, vegetable washing etc.  After lunch we were shown to our tent. Yes I said shown to our tent, here you do not walk to your tent unescorted especially between the hours of 4pm to, 8 am. A Masai warrior escorts you to and fro since there are definitely wild animals lurking, especially after dark. Generally The Masai do not allow their picture to be taken, but Beni talked him into it. Our tent was quite luxurious a large bedroom and in the rear a large dressing room with separate shower and toilet rooms.  The shower had walls of stone and was open with no roof.  The bed was a beautiful four poster out of carved ebony with mosquito netting all around.  The front of the tent consisted of a veranda sort of zipped in porch with thick zipped screens to keep out animals.  Then to enter you walked through a second set of zippered screens to the bedroom.  At night we slept with fresh air blowing in and all of the animal noises.

After dropping our stuff in the tent it was time to head out.  Beni drove us down to the shore of Lake Masek, a lake full of Hippos, who at night around 10 pm in the dark leave the water to trudge up to the grassy areas above to graze.    He explained how driving here was treacherous because a car could get stuck in the soft muddy soil quite easily. He had to pay close attention to which path he chose. We skirted the lake perimeter and on the other side we spotted a group of other vehicles gathered around a huge old acacia.  Beni parked the vehicle in a strategic location as close as he could. Up in a huge branch joint lay a large leopard having a leisurely nap.  He was unafraid of us and only occasionally picked his head up to scan the horizon. His beautiful big paws hung languidly over the tree branch.  We took pictures and video in silence for about 30 minutes as this was another unusual siting of an elusive animal. The leopard is the 5th of the big five animal group and know we had seen all 5. It was time to drive back to the hotel. Dinner was a long affair eating good food and talking about the day’s activities over wine and local Kilimanjaro beer.  We retired to our tents with escorts around 9:30 PM.  At 4:00 AM, I awoke to loud screams and growls as a lion took down a water buffalo somewhere near our tent. There were all kinds of wild things out there in the pitch black.