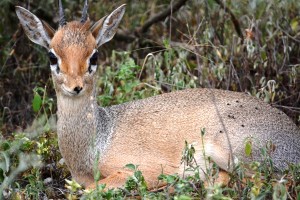 Breakfast tasted great after a long night of listening to growling and groaning animals so close to our tent that we could smell their droppings and hear them breath.  The air was now clean and fresh with a chill.  I never expected to feel a chill in the middle of equatorial Tanzania but the elevation provides for cool nights.

Driving out of the general vicinity of our lodge we passed DikDiks (a very small member of the antelope family), incredible colored birds and even some gazelles. Passing from Lake Masek we drove through the brush toward Lake Ndutu.  All lakes were at a low level since the rainy season usually starts in March.  First I spotted one large giraffe grazing in a tree , then another , then another.  Soon we stopped the car and just took pictures as about a dozen giraffe were gracefully walking and grazing on all sides of us.  The gate of the giraffe is so graceful to watch and their long necks sometimes intertwine with each in what looked like a show of affection  as they stood next to each other. Driving on toward the shore of lake Ndutu the road split in two.  Beni explained that the white stone markers we saw indicated the border between NgoroNgoro and Serengeti.  To take the lower road closer to the shore we would need a different permit which we could not obtain until the next day.  Around the lake we went watching the pale pink flamingos eating and preening at the water’s edge. These flamingos were a much more pale pink then the huge clusters we had seen on the opposite shore of Lake Maynara.  It all depends on their diet. Turning off we entered a hilly area and drove on for a while then all of a sudden as we descended a huge verdant green marsh land with many ponds and long grasses lay before us.  Hundreds maybe more, zebra were running through the hillsides and drinking water from ponds.  What a site to behold. Zebra bray very loudly and it seemed like they were all braying at one. Running to and fro, frolicking ,they are very skittish and avoid the Land Cruisers.  Beni’s radio was jabbering like mad and we soon found out why. Beni went up  a little incline just above the main watering hole and in a small thicket under a tree  the very elusive cheetah was leisurely enjoying his lunch of fresh kill, baby wildebeest.  He gnawed at the thigh until he got it loose.  His ears twitched as he kept his guard up watching the zebra and us tourists. After about one half hour we drove a little ahead to where we had spotted lioness hiding in the deep grass.  There we now two above in the open just snoozing and relaxing.  Their bellies must have been full as it soon turned into a group of three lioness, enough to take down any zebra they wanted for lunch. Over on our right a large bull elephant appeared with very long tusks.  Beni said you could tell if an elephant is a righty or lefty by his tusks.  The dominant side is always shorter or more worn down from use. It was time to head back.  Thunder clouds pregnant with rain were forming on the horizon. And there is no bathroom out there.  Lunch was on everyone’s mind.  We made it back to the lodge by 2pm. And at lunch we were all so exhausted by such a wondrous biblical, kind of day we decided to take the late afternoon off and take a nap. Shortly after going back to our tents the torrential downpour erupted with peels of thunder, it rained so hard that water was splashing onto our veranda.  Around 7 it letup enough to take showers in our open roof shower and we dressed for dinner. At dinner the conversation was about how bad the driving conditions would be the next day.  We retired early and the lions came out early, growling all evening in close proximity to our tent in the darkness.