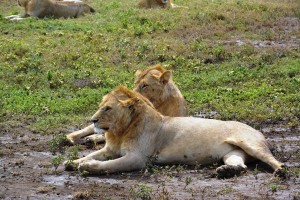 We awoke around 6:30 AM, showered, dressed, and closed up our duffle bags ready to check out and head for Serengeti.  It was going to be a very long day of driving over unpaved roads, but I would gladly pay that price to see spectacular scenery and animals.

Breakfast had everyone in high spirits looking forward to the day’s adventure.  Not far from the Lake Masek lodge is a small airstrip as many travelers choose to hop by small plane from lodge to lodge.  The rangers who grant the permits to proceed to Serengeti were at the airstrip.  All entries to the National Parks is highly regulated and the fees are used to maintain a lot of park rangers who patrol for poachers and man the gates.  They also maintain clean bathrooms here and there.

Back through some bush with low trees, tall Acacia trees, and scattered animals, we made our way to the open plain.  We drove forever, past a herd of zebra, antelope, gazelle, and a new variety of antelope to add to our list, called Coke’s Hartebeest. All of a sudden we came to a stop, there in the short grass not far off the road were 6 young male lions.  They did not bear the scars of the older male we had seen previously and their manes were much shorter.  They were affectionate with each other, probably all brothers.  The Land Cruiser has a pop up roof and so you jump up out of your seat and balance your camera with the long range lens on a bean bag for stability.  Snap, snap, come on pretty kitty look at mama. A group of hyenas seemed to be getting ready for a hunt on a herd of zebra nearby.  It is funny how I felt instantly repulsed by the hyena and the lions are perceived as beautiful being that both are hunters.  But then again the hyena eat their prey while they are still alive and scavenge carrion and their faces look evil, because they were the bad guys in the movie The Lion King (Hakuna Matata).  The lions have the courtesy to wait 10 minutes for their prey to die before they tear in. We crossed over into the Serengeti which means endless plain in Swahili.  We drove for another long while in the flat plain and then the terrain started to change.  The grass got longer and then, we spotted a caravan of lioness with their cubs, one female in front with cubs trailing along with another female bringing up the rear scanning all the while.  They were somewhat hidden in the tall grass. No male insight!  Turning off onto another road, a path almost, we spotted an elephant group, some males, some females and some babies.  They lumbered across the road in front of us, I was trying hard to catch a photo of their faces and not lose my balance standing up in the Land Cruiser at the same time. Finally we arrived at our picnic destination. Who could believe a fenced in area manned by Park Rangers with a coffee shop and clean bathrooms in the middle of nowhere! We ate quickly because we still had a long ways to drive and rain clouds and dark would be threatening us soon. Leaving the picnic area it was not long before we came to a beautiful watering hole where another group of elephants was playing in the water. The elephants start moving away as soon as vehicles stop.  We came across a stream where the road had sort of collapsed and so we needed to drive on the submerged stone bridge through flowing water.  We spotted Hippos further up the stream but you are not allowed to stop because the hippos could attack and we could get stuck, so onward we proceeded. Beni decide to take a short cut going out of the national park into the populated Mugumu area to cut across and save us and hour or two off of our drive.  We had to show papers and soon there were huts and people on both sides of us, many cows and goats.  Children were coming home from school all dressed in their uniforms and lugging their water jugs.  This is the rural poor of the Serengeti region.  Beni sped onward.  So many kids and they were walking in the middle of the road.  We almost hit one as he decided to dart back and I about had a heart attack.

I noticed some guys pulling a cart on the side of the road with very large knives at the ready. They were dressed all the same in orange uniforms.  Beni said they were prisoners from the nearby prison facility and that these prisoners on the road only had a couple of months before parole so they were trusted to be out.  Beni believes about 30% of prisoners in Tanzanian prisons never committed any crime, that the judge was just bribed.  A very interesting comment.  Sorry no pictures of peoples, they don’t like it.

As we passed the main part of town there appeared some very large gated luxurious homes.  After passing the prison with high walls we passed out of the main town and again into an area with huts and kids in different school uniforms.  Finally we came to the gate to re-enter Serengeti National Park.

My legs were getting so stiff, you really can’t get out anywhere.  The last bathroom had been at lunch and as it approached 4 PM we were getting anxious. I could barely see some rooftops in the trees up ahead.  We arrived at Bush Tops Serengeti Lodge. (click on the link to see pictures of the lodge) We were greeted with a very warm welcome.

The staff including the Manager, Panteleo, were waiting for us.  As we disembarked the Land Cruiser we were handed eucalyptus scented wet towels to wipe our dust caked faces.  Panteleo was very warm and friendly and directed us first to the beautiful bathrooms and then after leaving the bathroom tent we proceeded to the bar tent and main dining room.  We spread out on a deep seating bench and had orientation.  As the orientation started, all of a sudden a downpour of biblical proportions let loose with huge drops of rain, wind, thunder, and lightning.  I was so glad we had arrived before the storm started. We met our butler Neesa, a girl, and were served drinks and coffee cake, vegetable samosas and sandwiches while it continued with such huge drops of rain that they were even splashing into the dining tent. Maisha Marefu, Long Life in Swahili.  Ah civilization.  What a contrast to the poverty of the cow and goat farmers of the villages we had passed through earlier.

Each guest accommodation consisted of a private tent very luxuriously appointed with a hot tub on the balcony and a beautiful view.  A plush king size bed with a mosquito net awaited our tired bodies, (and yes I was able to request down pillows!) but first,  unpack,  shower, change , and be escorted in the dark up to the dining room by a Kuria tribesman for safety.. The lodge has 15 tents for guests in all.  A lovely 4 course dinner was served with a proper wait staff after first having cocktails and banana chips with peanuts in the fire pit lounge area.

After coffee and dessert, we retired to our room and there were hot water bottles in the bed to our delight. The temperature had dropped drastically since sunset. We are at 5,000+ feet elevation.  Oh just to let you know, we have our butler, Wi Fi, Room service, laundry and safe and there is a beautiful pool on a rock outcrop near the dining tent.   Lala Salama, sleep safe, in Swahili.