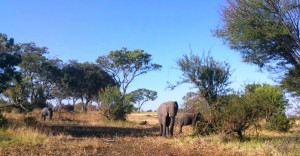 We were showered and dressed by sunrise and headed up to the main tent for breakfast.  I was not really hungry yet but tried to eat since we would be flying for quite a while. Two eggs over easy toast, marmalade and coffee with some fresh pineapple juice.  Ombeni arrived and we loaded our bags into the Land Cruiser. The gods were with us this morning because we passed a big troop of elephants grazing just off the road and they did not run when they saw us.  This was what we had been waiting for and here on the last possible day here they were.  I got fantastic pictures and video.

Arriving at a little airstrip, not even paved, just hard dirt with small crushed rocks, we watched various 12 seater propeller planes land drop off, pick up and take back off for a while.  Finally our plane arrived.  We hugged Ombeni, gave him bags full of stuff and the customary tips.  Our pilot was a young man from Spain with an air of confidence that calmed my flip flopping stomach.  I don’t usually fly in a small propeller plane over the Serengeti. The plane was frightfully hot but as soon as we rose in altitude the air coming through the vents cooled off and I was quite comfortable.  Over miles of the Serengeti with animals that you could pick out below we flew to another little airstrip where we refueled and dropped off a passenger. What a fantastic way to get an overview of the landscape. The next hop was a bit longer and then, the plane landed again in the airstrip near Lake Masek where, hard to believe, a few days ago we got permits to enter the Serengeti from the park rangers, a couple of people off a couple on.

Next stop Arusha Airport, where we would all transfer planes and proceed in various directions.  The young Doctors from the night before were going back to Kilimanjaro Airport to catch a flight to Nairobi, Kenya and then back to California.  An English couple we met on the plane was proceeding to the Southern Serengeti to a Game Reserve called Ruaha.  It was about a 50 minute flight to Arusha over the Ngorongoro crater once again.  Now the terrain had changed, verdant green, jungle like near Lake Manyara. One we landed in Arusha it was a kind of rush to use the facilities, so far out of the way, I guess people don’t go the bathroom during the day here.  We immediately boarded another plane with another pilot to Zanzibar then Dar es Salaam.  This plane was a little fancier but still only seated 12.  In all of the commotion Michael’s backpack got left behind.  This flight lasted 1 hr and 50 min.  Zanzibar is an Island in the turquoise waters of the Indian Ocean where Arab slave traders plied their trade many years ago.  There were some very luxurious looking parts from above plus white sand beaches and turquoise water. As the plane descended I could feel the heet coming through the floor of the plane. Out of the beautiful montains and high planes of the Seengeti now I could feel the miserable equatorial heat. We quickly dropped off some passengers and took off again for Dar (Dar es Salaam) as it is referred to around here.

After we deplaned an agent met us at the entry and explained that they found a backpack in Arusha  and we hatched a plan to get it to Dar es Salaam  International Airport before our 12 AM flight back home.  It was now about 2:30PM.  The heat and humidity were stifling.  Outside the terminal a driver with an air conditioned van from our day accommodations was waiting for us. Dar es Salaam is so hot, 95 degrees and 95% humidity.  It was unbearable, good thing the van was air conditioned. The crowds, traffic, noise and heat were all a terrific assault on our senses that had taken the last 10 days of serenity to heart.  Back to the stark reality of world politics, crime, and poverty.  The four of us arrived at the Oyster Bay Hotel a kind of home com hotel for travelers.  Located on Embassy row across from the beach we entered this beautiful oasis after a grueling drive through stop and go rush hour traffic with beggars at the van windows selling stuff.  All of a sudden we were in a noticeably Muslim place with head scarved women even some in full black gear with face covered, an Iranian Cultural Center/Embassy and Allah Akbar written in big letters on one public bus that I saw.  There were also billboards with sleazy women advertising for Casinos.

At the Oyster Bay Hotel we were shown to our very luxurious rooms that were decorated right out Elle Design.  We had a wonderful dinner, fresh papaya salad, fresh caught broiled snapper with rice and steamed vegetables and the Tanzanian answer to Bananas Foster for dessert.

Departure for the airport was at 9:30 PM in the air conditioned van.  It still felt like a crisp 80 degrees outside. We drove to a different terminal building, Michael said, China built this for Tanzania in hopes of furthering their trade relationship.  Not quality construction.

The agent from the other terminal actually found us and brought Michael’s back pack to him from the sum of $75.00.  Finally we boarded our flight to Amsterdam.  I sank into my comfortable seat and let the flight attendant take care of me as my internal body temperature reverted to normal.  I think I fell asleep for a while. It is 9 hours to Amsterdam.

This was truly a trip of a lifetime.  So full of contrasts and thrills, completely different experiences than I have ever had before.  Tanzania is the combination of two countries, the former Tanganyika and Zanzibar.  The two places and two peoples are very different.  Ombeni was a kind sweet optimist. In his life people work hard try to go to college and are very conscious of conserving and maintaining the special gifts contained in all of the National Parks and Reserves.

Dar es Salaam seemed like it had a very wide divide between the haves and the have nots and given what has been happening with Muslim poor in other parts of Africa I hope they manage to stay safe and away from turmoil.  Like Dorothy says, there is no place like home!