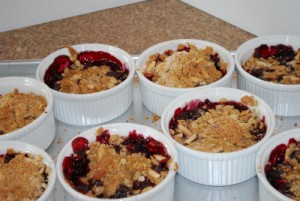 While growing up in Seattle, I developed a passion for blackberries and raspberries.  Blackberries grew plentifully on every vacant lot and on every little untended strip of soil all over the city.  On late summer afternoons, we would put on old clothes and carrying a well worn enamel sauce pan, head out to pick enough berries for a pie or cobbler.  Raspberries are more of a high brow berry cousin that requires some tending and planned cultivation, but blackberries were abundant and free for the taking.

The taste of blackberries, sweet and sour, with delicious juice, that thickens, make them my favorite berry for dessert.  I wipe the plates clean with my index finger when no one is looking.

Blackberries are usually rather costly these days, but I confess when Costco has the 1 pound 2 ounce plastic containers available for a comparatively reasonable price I can’t resist.

I mentioned this crisp for dessert a couple of posts ago in a Shabbat Menu with Lamb Tagine.  So, here is the recipe you all requested.

Rinse berries and spread them to dry on paper towels. After they are dry, place them in a bowl with the sugars, cinnamon, lemon juice, and corn starch.  Toss lightly to combine.

Prepare ramekins on a baking sheet to catch any juice that might overflow while baking.  Combine second list of ingredients for crisp topping, flour, brown sugar, white sugar, corn meal, oatmeal, cinnamon, almonds and margarine or butter.  Cut in butter just until there are still pea size chunks in topping mix. Divide berry filling among  ramekins.  Divide  topping equally among ramekins as you sprinkle it on top. Place  baking sheet in a 350º F preheated oven and bake for about 30-35 minutes or until  topping is browning and berries are bubbling up and around.  It is best, served warm and you could serve it with ice cream if you like.