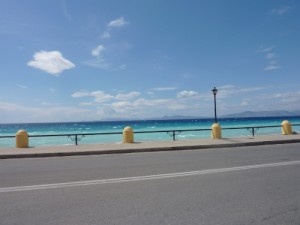 Today we woke up a little later, around 7, since our guide was scheduled to pick us up at 9 AM.  We went upstairs to the 10th floor dinning room, consumed a beautiful breakfast while gazing out at the Aegean Sea, and watching cruise ships coming in to dock.  The weather looked ominous. Alex was here at the hotel on time and we hopped in his cute little ford to drive to Lindos a little town and ancient ruins on the dry side of the island.  Driving past the rocky terrain, we passed many olive trees, citrus groves, and pistachio trees.  Rhodians rank highest in the world in per capita consumption of olive oil, tomatoes, and feta cheese.  We stopped at an outlook spot to take a picture.  Lindos was below in its white washed starkness surrounded by little bays of blue Aegean water and above it the towering acropolis and former fortress from antique times. We got out of the car in Lindos and started to walk up through the narrow winding, shop filled streets of the town.  The town soon gave way to steep steps going up the mountain side, then ramps going up, more steps until we reached the base of the fort, then more steps.  Once inside the gates there were more steps, over 300 in all.  I am breathing hard now and the hot bright sun has emerged to heat things up.  The ruins were amazing as well as the view.  There were layers of different conquerors and civilizations, Ancient times, Pagans, Romans, and Crusaders and on and on.  We began our decent down.  When we got down to the town, we zig zagged down a side street and sat down at a cafe for some refreshment.  I had a frappe!  Whipped espresso with sugar and ice.  Yummy!! Oh my gosh, we wanted to be at the Jewish cemetery in plenty of time before it closes, at 1:00PM lets run back to he car.  Alex our guide drove fast and we reached the cemetery by 12:30.  The cemetery is very well maintained in contrast to the decaying sadness we experienced in Tekirdag.  This was an exciting experience to see how many last names on tombstones we could recognize.  Although this is not the site of the original cemetery, the Italian occupiers under Mussolini had all the graves  moved outside of the city to this current location.  We bid adieu to the family buried here and headed for town. We still had many Jewish sites yet to visit.  We stopped for a brief snack of some Spanakopita and then parked outside the walls of the old city. We entered the old city through the Marina gate and walked to the old crusader hospital.  The hospital, started by the order of Hospitaller Knights during the crusades is very well preserved.  The balls from ancient catapults are stacked in corners of the courtyard and the building is massive.  On the street of the Knights, each country had its own building flying the flag of that country in front.  We started to walk to the old Jewish quarter down the old streets paved in part with riverbed stone mosaics, which could be very slippery. In the Jewish quarter, there is a memorial to the 1600 Jews taken by the Nazis.  Only 160 survived.  We made a right turn and entered the Kahal Kadosh synagogue.  It has been restored through generous donations.  Carmen the curator and her assistant were most gracious.  It was emotionally uplifting to see the old synagogue and imagine the idyllic life the community led here on Rhodes.

We followed the Calle de Los Ricos (street of the rich people) up and around, past another old synagogue now in use as some professional building.  We were looking for doorways with shadows or indentations from old mezzuzot.  Curving around the corner there appeared the old School Aliance where my Nona Capeloto and her siblings were educated.  There is a boys and girls school.  Rhodes was a community wealthy enough that even the daughters of the successful went to school in French to become refined young ladies.

We curved yet again into to what seemed to be a vacant lot but was the bombed out shell of the old Kahal Grande.  The Allies in WWII bombed it after existing for over 500 years.  Bits of the elegant marble inlaid floors remain and the foundation where the central Teva was.  Crossing over to the next street, the Calle Samuel Alhadeff, we started walking back towards where we left the car.

Alex drove us back to the hotel where we left all of our excess bags and then he returned us to the old city to eat and walk some more.  We were starving.  We bid Alex goodbye and walked to the fish restaurant at the corner of Aristotle and Alhadeff Street.  The owner was so nice.  He took us into the kitchen to pick out our fish for dinner from the ice drawers of fish.  We ate a wonderful dinner of arugula salad, potatoes, and grilled sea bass.  While speaking with the owner after dinner he explained that this used to be a bakery but his father and he changed the business to a restaurant. We explained that our grandparents were from Rhodes and he said that at one time this building had been the Beit Yacov School for girls.  We followed him into the back and there, to our amazement was a stone, in the ceiling molding, in Hebrew proclaiming this the Beit Yacov School!  I asked if he was familiar with the name Capeloto, he said of course.  I asked if he knew where the Capeloto bakery was and he said sure, and pointed out the locations to us.  It is catty corner to his restaurant inside an area fenced off for renovations.  Wow, my heart skipped a beat. We walked back into town and decided to find the Mandrake, a boardwalk that juts out into the harbor where the Colossus of Rhodes stood in Ancient times.  Our great Auntie Notrica talks about strolling on the Mandrake in her video about the Island of Roses or Rhodes.

Well back to hotel and goodnight all.  Linda