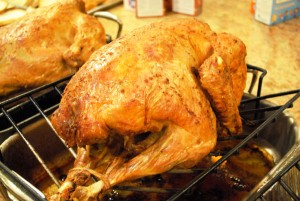 In our home turkey is king. We all love all the traditional Thanksgiving dishes, but turkey is so good we eat it all year round.  To my regret I must admit though, I have a complaint to lodge with kosher turkey processors.  I contend that what they are selling to a kosher, captive market are turkeys processed in such a careless manner, that I cringe every time I buy one. While they are fresh and tasty, they are physically ruined

In recent years the conventional wisdom has shifted to recommending brined turkeys for best results.  To my understanding since kosher turkeys are brined in salt during the koshering process that they are in essence brined.  The processors of kosher turkeys, rather than put two and two together and see  this as a chance to sell more turkeys and increase their market to kosher and non kosher consumers, have not upgraded the look of their finished product.

Typically the breast skin is wacked to the point where it no longer covers the breast meat. Many times the legs have been carelessly torn away from the body and require a lot of sewing or tying to put the birds back together.  One wonders if any of these processors has ever cooked a turkey enrobed in crispy skin that protects the succulent juicy meat within. With this in mind I spent the money, went to several different markets and butchers carrying kosher turkeys, and I purchased 4 whole birds.  First picture and probably the best in terms of being intact were two Chai brand birds from Canada. I purchased the Chai turkeys at Kosher Club.  The breasts were only a little over trimmed on the front portion of the breast.

Second picture is a Kosher Valley turkey.  As you can see the leg is ripped from the bird only hanging on by a bit on top of the thigh. Third is an Agri Star bird from my butcher Doheny Kosher.  The proprietor is very picky and he only sells the best quality.  I asked him about this problem and he says that when the large plants send the birds through some feather picking machine that they speed it up and it dings the birds!  I think that the plant could take a little more time and do a good job. There are other kosher brands like Weis Organic and I will confess that I have not tried theirs since it comes frozen and I didn’t have two days to defrost a bird in the fridge.  I did buy Empire for years but they are so salty and also had the ripped skin problems. Aaron’s Best has a bad reputation, also ripped and well been there done that.

I compensate for the ripped breast skin and the separated legs by tying the legs together with string and roasting the turkey breast side down.  This upside down method helps the juice pool in the breast meat and protects the uncovered portions. This method yields a succulent bird but not that pretty turkey that you see in the pictures on the big platter brought to the table and then carved.  I carve my turkey and place the slices on platters to serve. In my head I have a little time table, so depending on the weight of the turkey I buy to figure out how long to cook it.  Around 3 to 3 ½ hours for 14-16 pounds, around 4 to 4 ½ for a 20-22 pound bird and so forth.  A lot has to do with how thoroughly defrosted or fresh your turkey is.  Are there still ice crystals inside?  Or perhaps this bird has never been frozen.  In any case the ultimate judge of doneness is the thermometer.  An instant read meat thermometer stuck in the thickest part of the thigh must be between 165°-170° to indicate doneness.  Remove the bird from the oven and let it sit an hour, uncovered, before you carve it. To prepare the turkey, puree the garlic , olive oil and spices in a small blender. Above I have given suggestions for three different flavors, pick one, then give the turkey a massage inside and out.  Place the turkey upside down on a rack in a large roasting pan.  Make a tent out of aluminum foil that only covers the turkey.   Do not close the foil tight.  Place the turkey in a 400 degree preheated oven.  After 15 minutes  turn the oven down to 325 degrees. and roast until the thermometer inserted in the thickest part of the thigh reads 165 degrees. I hope these carving pictures are helpful.  I now have enough frozen whole turkey breasts to make a lot of sandwiches.