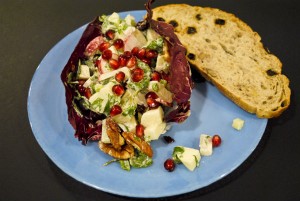 This is not the Waldorf salad of your childhood with canned fruit cocktail and marshmallows, OMG, This is a fresh crunchy, kill the winter doldrums, salad from a recipe that appeared in I believe Bon Appetite magazine many years ago.  It has been in my recipe file for a long time, so I am not sure exactly which magazine or what year, but it is tasty, healthy, and fun. It makes a great buffet dish for your Super Bowl Sunday; or a beautiful plated first course for a dinner party. The recipe is easily increased or decreased. I have updated the look of the salad with the addition of pomegranate arils for garnish.  The salad leftovers will keep for one night for some lucky soul browsing in the refrigerator the next day.

Mix mayonnaise, lemon peel, and fresh lemon juice in medium bowl to blend.  Season the dressing to taste with salt and pepper.  Refrigerate the dressing for at least 15 minutes or until you are ready to use it.  Toss the apples, celery, radishes, cranberries and red onion in large bowl.  Add lemon mayonnaise and toss to coat.  Fold the watercress and toasted pecans into the salad.