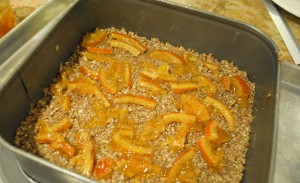 Calling all cheesecake fans.  It is the time of year when there are plenty of unused packages of cream cheese left in the refrigerator from overly ambitious Passover plans.  The cream cheese still has a long way to go before the expiration date.  Thinking ahead, Shavuot is coming up, as well as Mother’s Day, Father’s Day and many other brunch opportunities, where a cheesecake would shine as dessert.  I have a lot of eggs left over, special chocolate bars, bags of fancy pecan halves, and jars of orange marmalade.  Cheesecakes are the perfect fit for these ingredients, like the mystery baskets on the TV show Chopped. 12 ounces of semisweet or bittersweet chocolate Place ground pecans into a 9 inch springform pan.  You can use a 9 inch square springform or a 10 inch round one as well with good results.  Add melted butter to pecans.  Mix and pat moistened pecans evenly into bottom of pan for crust using your fingers.  Place bits of candied orange peel with a little jelly clinging to them from the marmalade evenly over pecan crust.  Set springform pan with crust on a rimmed baking sheet to catch any spills in oven, and set that aside while making cheesecake batter.

Break up chocolate into small pieces and place in a medium bowl.  Heat 2 inches of water in a medium saucepan over low heat.  Place mixing bowl with chocolate over hot water.  Make sure bottom of bowl does not touch the hot water.  Let chocolate melt and then, stir until smooth.  Remove bowl of melted chocolate from saucepan and set on counter while you prepare the rest of the filling ingredients.

Heat oven to 350° F.  For filling, place room temperature cream cheese in mixing bowl of a stand mixer or large bowl if using a handheld mixer.  Beat cream cheese on medium-high until fluffy, then stop and scrape down sides of bowl with a scraper.  Next, add sugar and mix until incorporated.  Now add orange marmalade and vanilla and combine.  Beat in eggs one at a time. Blend in melted chocolate.  Pour batter into prepared springform pan. Place baking sheet with springform pan in oven and bake for 45 to 55 minutes.  Cake will be slightly puffed and barely set in the middle.  Remove cheesecake from oven, increase oven heat to 400° F.

Next day, to prepare chocolate ganache, break up chocolate in a medium mixing bowl.  Place whipping cream and butter in a small saucepan.  Warm over medium heat until butter is melted and cream is very hot but not boiling. Pour cream mixture over chocolate and whisk until melted and smooth.  Let ganache sit until cool, becoming stiff enough to hold a shape.

When ganache is stiff enough to pipe, remove cheesecake from refrigerator.  Run a sharp knife around the perimeter and release the spring of the springform pan. Unmold cheesecake and place on cake stand or cake keeper base.  Prepare a disposable pastry bag with a large plain tip and fill bag half way with chocolate ganache.  Pipe ganache over top of cheesecake.  If you are not comfortable with a pastry bag, use a small icing spatula to frost the top of cheesecake.  Make it thick!  Garnish cake with candied orange peels.