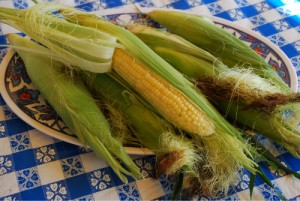 This time of year, farm markets have the new ears of corn fresh cut from the stocks, sometimes still warm from the sun.  Encased in their crisp green husks with translucent thick strands of corn silk dangling out, I buy as many ears as we can eat in just a couple of days.  Not just for boiling for a few minutes and eating plain, corn makes great relishes, salads and is wonderful grilled directly on the barbecue in its husk with some flavoring like olive oil with herbs.  This is one of my favorite salads, so easy and portable for picnics. 3 green onions, washed and chopped finely including a little green

Shuck ears corn.  I never buy corn that has already been shucked because you have no idea how old it is.  When corn is in its husk, you can see how fresh and green the husk is, and how new the silk is.  When the silk is too brown it means the corn is over ripe and the kernels are probably very large and starchy.  For the sweetest corn, pick ears that have a bright green husk with translucent white or clear silk and smaller kernels, more round, than square.

Bring a large pot of water to a boil over high heat.  Place corn in water and boil for 2 to 3 minutes.  Remove corn from boiling water and when it is cool, slice off kernels, going down each side with a large chef’s knife.  Break up corn into individual kernels.  Open cans of beans and drain them in a sieve.  Give beans a rinse with cold water.

Combine corn, beans, bell pepper, chilies, green onions, cilantro and tomatoes  in serving bowl and dress with the lime juice.  Top with avocado if you wish.

This is great with any grilled or barbecued meat, chicken, or fish.