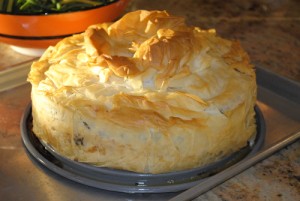 Bastilla, a bit of Moroccan genius, is a dish to serve when you want to impress your guests and have time to cook.  Having consumed various Bastillas and been intrigued and delighted with the combination of chicken, cinnamon, and almonds, I never dreamed of recreating it at home.  Until that is a dear friend and fellow PTA cooking class teacher, introduced me to her version at one of our classes some years ago.  It was delicious, crispy on the outside, a delight of contrasting textures and tastes enrobed in a phyllo crust.

I usually serve Bastilla as a starter to a meal.  After baking in a springform pan, I remove the springform ring and place the Bastilla back in the oven until the sides are as gold as the top.  To serve, dust with powdered sugar and slice it into pie shaped pieces with a serrated knife. I changed the recipe from the original given to me by my friend.  I make the recipe with olive oil instead of butter or margarine for kosher and health concerns.  I use chicken thighs instead of breasts, since thighs more closely resemble the original Moroccan dish, which uses dark meat pigeon.  You could substitute 4 large breasts instead of the thighs if you prefer.

On occasion, I make individual, triangle shape bastillas, plated separately, each with its own dusting of powdered cinnamon sugar Heat a skillet.  When the skillet is hot, add the olive oil and then the onions.  Reduce the heat to medium.  Season the onions with salt and pepper.  When the onions are translucent, add the parsley and cilantro.  Stir for a few moments, then turn off the heat, and let the vegetables cool. Spread the almonds on a baking sheet, and roast in a preheated 350 degree oven until lightly colored and flavorful.  Measure the cinnamon and sugar in a shallow bowl.  Mix the hot roasted almonds with the sugar and cinnamon.  Set aside.

Remove the cooled chicken thighs from the poaching liquid, shred and set aside.  Place about 1 cup of the chicken poaching liquid in a sauté pan and bring to a boil.  Beat the six eggs well, add to the stock, and gently scramble.  Remove from heat when cooked.  The eggs will absorb most of the broth. Preheat your oven to 350º.  Assemble all of the prepared ingredients, the shredded chicken, the toasted almonds, the sautéed vegetables, and the scrambled eggs.  Open the package of phyllo dough.  Place the ½ cup of extra virgin olive oil in a small dish with a small pastry brush ready at the side.  I prefer those new silicone pastry brushes.  You can get them in various colors to keep them for separate uses.  Grease a 9-10 inch springform pan with olive oil.  Unroll the phyllo dough and cover with plastic wrap or a damp tea towel until you are ready.  Phyllo dries out quickly and then it crumbles.

Brush 4 sheets of phyllo lightly with oil.  Spread and push the phyllo into the bottom edges of the springform pan, up the sides and extending in an overhang over the rim of the pan.  Take another brushed 4 sheets of phyllo and place adjacent to the first set.  Place the phyllo sheets covering the bottom of the springform pan, up the sides, with overhangs of phyllo sheets all around the pan.  The overhangs will fold back over the pie to seal and cover the pie once it is full. Place half of the shredded chicken on the bottom of the prepared pan.  Follow with one half of the vegetables, eggs, and almonds.  Top this filling with three sheets of phyllo, painted with olive oil, folded in half.  Press down, and tuck the edges down around the filling.  Repeat with chicken, vegetables, eggs, and almonds for a second layer.  Take three more sheets, lightly brushed with oil and folded in half, then cover the second layer.  Brush with a little oil. Paint a little olive oil on the extended edges of the phyllo dough.  Roll them inward grabbing each successive overhang to create a puffed out rolled edge.  To create a phyllo flower, to decorate the center of the pie, fold two sheets of oil brushed phyllo into 4ths vertically.  Pinch and pleat this strip into a gathered circle with one side tight and one side open to create the flower.  Place the flower in the center of the pie.  The flower might look messy, but once it browns, it is beautiful. Most of the ingredients for the layers in the Bastilla can be prepared the day ahead and stored in airtight containers overnight.