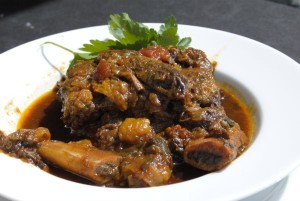 The other day while on the subject of short ribs, short rib tagine sounded very tasty so here is what I made.  Oh, before you look at the recipe, the trick to making short ribs a bit healthier, as well as buying well trimmed short ribs, make the dish in the morning, let it cool, or even refrigerate it for a while.  All of the excess fat from the ribs rises to the top and congeals.  It is easy to remove, just skim it off with a spoon before reheating.

2 onions, sliced in thin half circles

Juice of one lemon

Cut the short rib lengths into 3 inch sections, between the ribs.  Preheat a large heavy bottomed pot and then add the oil.  Add the short ribs piece by piece and sear them until gold and crusty. To sear with a good crust do not attempt to move the short ribs in the pan for at least 1 or 2 minutes.  If  you move them right away they will stick and you will have grey meat and not gold crust.  Season the short ribs with salt and pepper while searing.  Remove the short ribs from the pot, set aside, turn the heat down to medium, and add the onions to the oil.  Stir the onions with a wooden spoon to separate the half circles.

Next, add the smashed garlic and continue stirring until the onions and garlic are transparent and sweet.  Add the parsley and stir a bit more. Season with salt and pepper.  Add the chopped tomatoes, lemon juice, dried fruit, tamarhindi and spices.  Place the short ribs in the pot and add some water to barley cover.  Turn the heat down, cover with a tight fitting lid and leave the meat to simmer for about 3 hours on low heat. When the dish is ready the meat will be falling of the bone tender.  Serve this with rice.