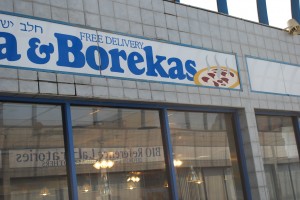 Greetings from the East Coast.  Sunday I embarked on my bi-annual visit to my sister in New Jersey.  Our get together ritual includes a week long shopping, eating, and seeking out unique food emporiums, adventure.

Queens was our destination today, since we would pass it on the Van Wyck expressway from JFK to Long Branch, New Jersey. We exited the expressway to check out the 5 towns, including Lawrence, Woodmere, and Cedarhurst.  To my delight, several eateries on the main drag were advertising Borekas on their billboards. The heat of the day was becoming oppressive with the high humidity making the air heavy and we returned to the car after trying to buy an unsweetened iced green tea.  I guess they don’t drink that here.  It was time to head to our real destination, Piyaz, a Turkish restaurant. Piyaz is the only kosher, authentic Turkish restaurant in the United States.  Piyaz has been open less than a year.  It’s bright and cheerful ambiance and spotless appearance made me hopeful that the food would be tasty.  The name Piyaz comes from a Turkish salad with white beans, lettuce, parsley, onions, and green peppers.  Although the two of us ordered enough food for 4 to 5 people we didn’t order the Piyaz.

Our waiter, a handsome, fresh faced, young man from Odessa, was eager to please.  We ordered a combination plate of cold appetizers including, tabouli, roasted eggplant, eggplant with tomatoes, spiced minced eggplant with red chilies, and lemony stuffed grape leaves.  The eggplants were all very different, but the smokiness and fruity olive oil was evident. I enjoyed the fresh green parsley taste of the tabouli.  The almost creamy rice stuffing of the grape leaves was delightful.

Next came the lentil soup, just like my mom’s, thick and creamy with just the right amount of seasoning. The hot appetizers on the menu all sounded so tempting, we finally settled on the Kuba, lamb stuffed bulgur wheat dumplings fried crispy and a spinach stuffed, 10 inch long boreka of homemade filo dough baked to a golden brown.  A platter of Lahmagun, thinly layered, puffy, baked dough topped with spiced ground lamb and tomatoes was well flavored but not overlly piquant.

We were starting to feel a little full, so we sent the unfinished platters back to the kitchen to be packed up in doggie boxes.  Just then, the waiter appeared with a huge mixed grill platter on a bed of rice pilaf.  The mixed grill included, Shawarma, Chicken Shish Kebab, Chicken Adana, Beef Shish Kebab, lamb chops, and chicken chops garnished with grilled peppers, tomatoes, grilled onions, and lemon slices.  Each meat had a slightly different spice and seasoning.  The phrase ‘bet you can’t eat just one’ comes to mind.

Since everything was so flavorful and reminisent of my families cuisine we ate until the bursting point.  Piyaz is unique in its menu choices, and if you are on the East Coast, or fly into JFK take the time to detour down  the road less traveled so to speak and experience an authentic taste of Turkey.